The loop Akjoujt / Akjoujt had been announced as the icing on the cake of this year’s edition. The stage of 379km kept all its expectations and gave us a completely crazy race, which messed up team strategies and seriously mixed up the overall car / truck ranking. This stage was also crowned the Mauritanian Baja thanks to the partnership of the AFRICA ECO RACE with the Mauritanian Motorsport Federation (FMSM). This stage was in memory of Ahmed Ould Abdelaziz, nonetheless than the son of the current Mauritanian President and especially because he was a close friend of Jean Louis SCHLESSER, who left us on December 22nd 2015 at the age of 24 in a road accident. 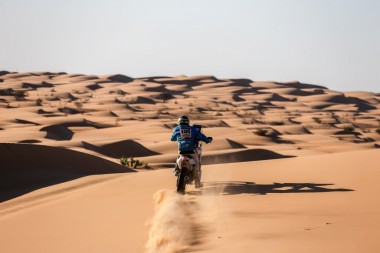 Once again Pal Anders ULLEVALSETER won the day’s stage. Nothing new to point out in the two wheel competition, apart from the very satisfying smile lighting up the Norwegian’s face at the end of the stage because of the pleasure he took riding the astonishingly beautiful leg with all the difficulties one would expect in such an off road rally. With his 6 hour lead towards the second rider, Pal Anders decided to play it safe and to not harm his KTM, he will only start to chill and relax tomorrow evening at the end of the stage.

The pleasant Brit, Andrew NEWLAND finished once again second, with a gap to the leader of 15’42’’, but in front of José Fernando DE JESUS SOUSA JR who once again crossed the finishing arch wheel to wheel with his father, who was a bit bruised and battered by a fall in the sand dunes. With no hard feeling for his father was beaten this time by the Italian HUSQVARNA rider Stefano CHIUSSI in 4th position, where only 18 seconds separates the two Portuguese riders.

The 6th places comes to Anastasiya NIFONTOVA, who’s HUSQVARNA fortunately managed to gain the bivouac in time to enable her mechanics to get it ready for the start this morning. The Russian rider found her smile again at the finish line, especially as she managed to beat Stéphane HAMARD, the Frenchy and the first rider without assistance, who has come all the way from the Reunion Island to rediscover the feeling of a real rally. For the moment, the HUSQVARNA rider who owns a bike dealership back home on this little island in the Indian Ocean, is third on the podium with only a 5 minute lead on the Russian Dmitry AGOSHKOV who happens to be using the same bike. The stage tomorrow will determine the final ranking in the bike category. Before then, Pal Anders ULLEVALSETER received this evening at the bivouac the first position prize for the Mauritanian BAJA.

The car race ranking exploded 100km from the finish 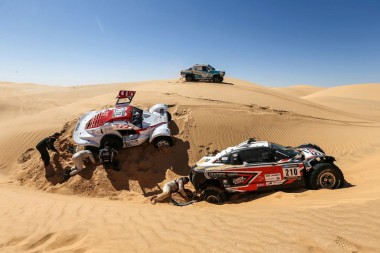 All day during this 10th stage, it was a succession of getting stuck and starting again except the winner of the day David GERARD, and maybe his right hand Guillaume GOMEZ too, but everyone was caught out.

Apart from that, the race was well balanced. Pascal THOMASSE, who was in 3rd position at 100km of the finish, was on his way to take the lead the overall ranking of the AFRICA ECO RACE, as Kanat SHAGIROV was slowed down as he was busy digging his car out for many long minutes. Unfortunately for Mathieu SERRADORI, who since the start of the day had not driven into any major struggles, found himself getting stuck on his way down from a little dune and blocking the track. Pascal THOMASSE who was just behind him at the time, had no other solution with his OPTIMUS but to avoid the SRT Buggy and get himself stuck in the sand. This sand pit cost the two buggies just over 30 minutes and enabled the TOYOTA of Kanat SHAGIROV to overtake them both and finish in 4th poisiton of the stage, just behind the TAREK of Patrick MARTIN who also won the Mauritanian BAJA in the car category.

During this stage, Kanat SHAGIROV increased his lead on Pascal THOMASSE by 18 minutes on the before last stage of the rally. The Kazakh driver keeps the lead of the AFRICA ECO RACE by 26’43’’ in front of the Team MD Rallye Sport’s driver. On the other hand, the sand digging operation done by Mathieu SERRADORI which lasted 30 minutes cost him the 3rd place in the overall ranking, and he is now 4th 1’15’’ behind his compatriot Jean Antoine SABATIER. The fight for the last podium place will be epic, first we have the two buggies created in the workshop of Lionel CONSTANT, then we have Patrick MARTN, who is 5th only 30 minutes behind, who could seize the smallest error from the other two to jump in front. And finally we have Jean Pierre STRUGO, in 6th place, who is still fighting for a stage win. 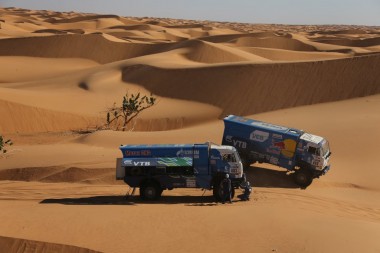 After their bad performance from the day before, the two KAMAZ trucks were eager to find their performance again in order to secure their 1 – 2 status in the overall ranking. This was made very complicated when a new mechanical problem struck Sergey KUPRIANOV, the driver from the Hybrid KAMAZ was towed by his team mate until CP1, were he did had to wait for the assistance truck to come fix him. This time Anton SHIBALOV could not do much more to help his team mate.

The leader of the overall ranking they finished the stage just 45 minutes behind the very strong TOMAS TOMECECK, who once again help greatly by the particular design of his TATRA which seems to be built for the sand.

Thanks to this impressive demonstration of speed and skill the Czech boosted himself into second position of the overall beating Elisabete JACINTO who today went through hell out on the course. The Portuguese driver is a fighter as even without the steering column shock absorber in her MAN, she still managed to complete the day’s stage only 45 minutes behind Anton SHIBALOV. Exhausted but happy, she shared with us her feelings as soon as she was out of the driving seat :
“Every year, I feel stronger the take head on any difficulties of the AFRICA ECO RACE. But every year, the Mauritanian desert reminds than you need to be smart when you are in there. I love this race and I will come back strong and more motivated than ever.”

Saturday January 9 2016, the final stage of the AFRICA ECO RACE will take place from Akjoujt in Mauritania to Saint Louis in Senegal. In between the two there will be a 208km leg which looks very exciting, nothing is over until you the checked flag ! 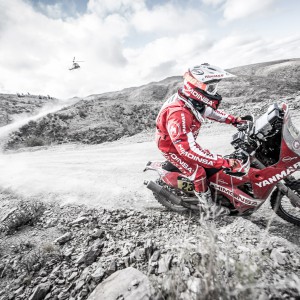 The Uyuni Salar is some of the most spectacular scenery in the continent and is now a symbol of the hardness in Dakar Rally....
Copyright 2011-2016 Rallyraid.net - RISE Network. All Right Reserved.
Back to top