The Netherlands are enthusiastic about the 2016 Silk Way Rally! 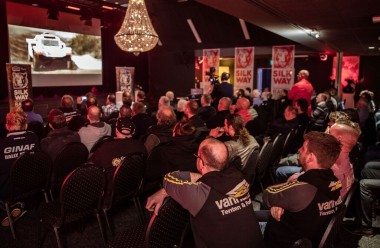 It was crowded, this Wednesday at Buren, Netherlands to attend the Dutch presentation of the Silk Way Rally 2016. Among them, several trucks’ stars, as Hans Stacey, Pascal de Baar and Gerard De Rooy, who confirmed their great interest in the event, to the numerous media on spot. A popular success which shows once again the growing international enthusiasm for the race, which will start on July 8 from the Red Square in Moscow to head to Beijing.

It was crowded, this Wednesday at Buren, Netherlands to attend the Dutch presentation of the Silk Way Rally 2016. Among them, several trucks’ stars, as Hans Stacey, Pascal de Baar and Gerard De Rooy, who confirmed their great interest in the event, to the numerous media on spot. A popular success which shows once again the growing international enthusiasm for the race, which will start on July 8 from the Red Square in Moscow to head to Beijing.

5 days after the presentation of the Silk Way Rally 2016 in Astana, capital of Kazakhstan, attended by government officials and Kazakh automobile federation, the Board of Organisation, led by its Director Vladimir Chagin, was at Buren yesterday in the Netherlands to present the event to the Dutch competitors.

In keeping with the best Dutch tradition, several stars of the very popular truck category were keen to make the move to express their interest in the event. Pascal De Baar came for the occasion with his race prototype and he particularly praised the qualities of the expected Chinese route, which he discovered with the TransOrientale, in 2008. He even confessed that he was really looking forward to be back on these tracks!

The world stars of the rally’s mastodons, however, were not the only ones to express their enthusiasm for the Silk Way Rally 2016. In the car category, several Dutch pilots were also present in Buren. Thus, Henk Theunissen from Go2Dakar Team has also mentionned the project to see his team presenting no less than 5 vehicles on the Red Square start podium in July.

Many announcements and much enthusiasm which of course received a highly positive response among the journalists from leading Dutch media present. This perfectly reflects the growing enthusiasm for what looks, a little more every day, like the new big event of the world of rally-raids!

«I am very pleased to see the great interest of the Dutch people in the “Silk Way Rally”. The Netherlands are a nation of gifted rally-raid pilots. I am sure that they will like the route of the SWR. On the way from Moscow to Beijing we are prepar ing interesting stages with a great variety of landscapes, where the crews will be able to demonstrate their skills, both in piloting and in navigation.

The preparation of the race is now at its final stage and the general reconnaissances of the route will be hold soon.

Entries are also on the way. The participants try to catch up the period for reduced entry fees in order to focus then on their preparation.»

«After my first Dakar in 2005 I thought I had done the greatest adventure ever, but I was wrong. The greatest adventure was the TransOriental e from St Petersburg to Beijing in 2008. You really have no idea how though it is. We have crossed an area named ‘The dunes of no return’ , where I instantly got a fear of heights . I have never seen such dunes neither before, nor afterwards! But we will see that kind of dunes on the SILK WAY 2016 and I’m absolutely delighted and looking forward to that. You can count me in.»

«The plans look really good. I’ve been to the Silk Way Rally before and it was a great rally. This route, all the way to Beijing, is even better looking and I’m eager to go there . It seems like a wonderful adventure and a big challenge and I’m really fond of that.»

«I’ve won in Africa, I’ve won in Beijing and I’ve been on the podium in South America. I’d love to go, because the new format of the Silk Way Rally makes it one of the toughest rallies in the world and the route looks really interesting. There will be at least one or two trucks from the EVM team.»

«We are building a new Mercedes truck and if it is ready o n time, I will take part in the Silk Way Rally.»

«I’m interested. I’ve done the Silk Way Rally on a buggy and on a truck. In the Dakar I’m riding a quad, but I’m seriously considering to enter this Silk Way Rally with a car. It would be the first time with a car (other than the solo buggy) . Moreover it’s a route I haven’t done before – and I like doing things I’ve never done before. The tougher it gets, the more I like it.» 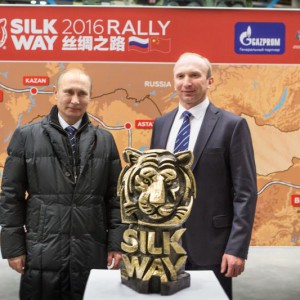 On the occasion of a visit to the Kamaz factory in Tatarstan, the President of the Russian Federation Vladimir Putin met the Director...
Copyright 2011-2016 Rallyraid.net - RISE Network. All Right Reserved.
Back to top