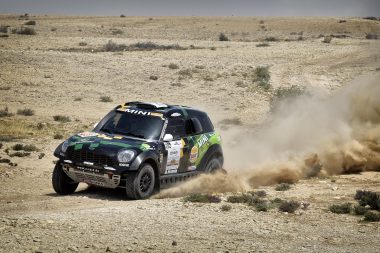 Just about a week after the very good result in the Abu Dhabi Desert Challenge, three MINI ALL4 Racing pairings and the buggy now contest the Sealine Cross Country Rally. The event held in Qatar represents the third round in the 2016 FIA Cross Country Rally World Cup season. MINI ALL4 Racing pairing Yazeed Al-Rajhi (KSA)/ Timo Gottschalk (GER) successfully tied in with their performances in Abu Dhabi to finish second on day one, just 44 seconds behind Nasser Al-Attiyah. Ricardo Porém (POR) and Tom Colsoul (BEL) took their MINI ALL4 Racing to third place and the third MINI ALL4 Racing, raced by the Russians Vladimir Vasilyev and Konstantin Zhiltsov, finished fifth. Jutta Kleinschmidt and Philipp Beier (both GER) came eighth, with the squad’s buggy.

Al-Rajhi today proved to be the toughest rival of Al-Attiyah, with the gap temporarily amounting to just seven seconds. Only in the final stages, Al-Attiyah succeeded in slightly re-increasing his lead. At the same time, Porém who is contesting his first desert rally with a MINI ALL4 Racing battled it out with Qatar’s Khalifa Saleh Al-Attiyah for third position for a long time – and prevailed in the end. Vasilyev impressed with a consistent performance, today. And the buggy that is supposed to again cover a lot of important testing kilometres also made it to the top 10. As the rally wasn’t started with a prologue, today’s result and the overall standings are identical. 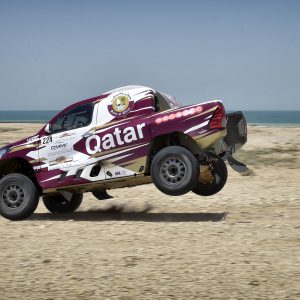