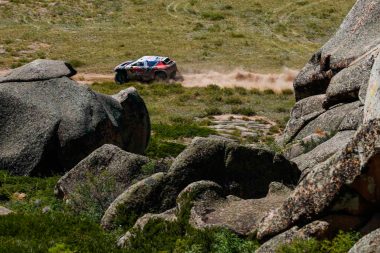 Cyril Despres and David Castera set best time on the longest stage of the rally (568.24 km).and no one was more surprised than the newcomers to the French powerhouse. “If someone had said that after starting 10th, I would’ve been the car opening the tracks at the end of the special, I wouldn’t have believed them”, said Despres after winning his 2nd stage of the 2016 Silk Way Rally. Yazeed Al Rahji and Timo Gottschalk finished second in his MINI ALL4 Racing, despite suffering three punctures. The Saudi is now 3rd overall at 14’38”. The MINI ALL4 Racing crews of Aidyn Rakhimbayev and Anton Nikolaev and Harry Hunt and Andrea Schulz made it three MINI ALL4 Racing entries in the top four. Sébastien Loeb completed the top five and now trails Despres by 14’22” in the general classification.

Starting first in Astana, Stéphane Peterhansel and Jean-Paul Cottret suffered a spectacular accident with fortunately no injuries to the crew. At km 416, the Peugeot DKR 2008 suffered major front end damage when it nose planted and rolled. The car was put right with assistance from Sébastien Loeb and Daniel Elena, who arrived on scene just after the incident. Forced to wait for their assistance crew to arrive, the French duo hope to make repairs and continue on to the Balkhash bivouac.

The T2 category was won by Akira Muira and Laurent Lichtleuchter in a ToyotaVDJ200 ahead of the class winners the past two days, Aleksandr Terentiev and Alexey Berkut in a Ford Ranger F150. Konstantin Ivanov and Alexsandr Gorkov in a Toyota LC200 were third among the production based competitors. 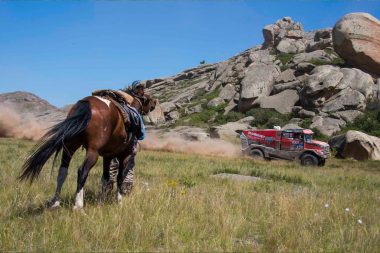 Martin Van Den Brink overtook 30 cars and 8 trucks in his Renault K520 to triumph in the truck category. It was a nip and tuck battle between the Dutchman and Airat Mardeev for most of the stage, with the advantage to the Russian. But in the final 100kms the turbo in the N° 306 Kamaz broke and the crew limped to the finish to finish a 39’46” to Van Den Brink, whose time would have placed him runner-up in the car category. Eduard Nikolaev was second, at 09’08” and saw his overall lead cut to 11’42”. Anton Shibalov, Siarhei Viazovich and Andrey Karginov completed the top five. 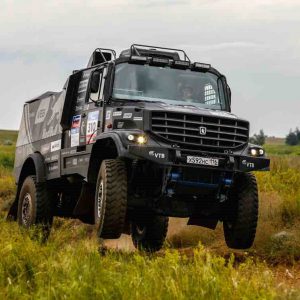 Stéphane Peterhansel and Edouard Nikolaev both set best time on the shortened Kostanay -Astana stage to take the overall...
Copyright 2011-2016 Rallyraid.net - RISE Network. All Right Reserved.
Back to top