The administrative checks and scrutineering are now in the rear-view mirror as edition six of the Silk Way Rally received a hero’s send off at the foot of Saint Basil’s Cathedral in Red Square. 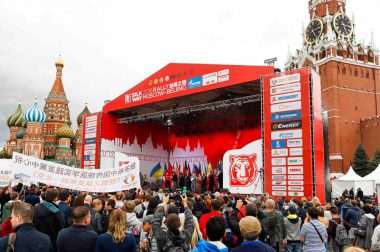 Red Square took on an international flavour this Friday with a parade of nations representing the field of the 2016 Silk Way Rally. The clouds lingering above the Kremlin were no match for the enthusiasm of the competitors and public alike.

Along with a speech from Tatarstan President, Rustam Minnikhanov the crowd was entertained by the Alla Dukhova’s ballet, Kazakh pop group, “The DIGITS” and the Chinese Golden Dragons acrobatic squad.

The festivities concluded with the podium roll-off led by Stéphane Peterhansel and Jean-Paul Cottret in their Peugeot DKR 2008. But for raiders driven purely by passion, rolling off the start podium is a victory in itself. The months of blood, sweat and tears are behind them. Now they have 10,700 kms to manage and enjoy on their adventure to Beijing. 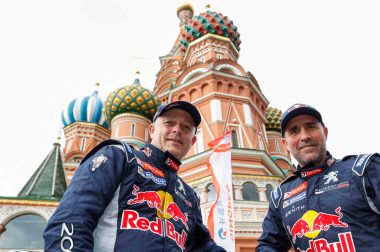 Russia, Kazakhstan and China are stepping onto the international motor racing centre stage and the pride of being the epicenter of the summer’s most important motor race is palpable.

From champion, to team principal to now Rally Director, Vladimir Chagin is a rally-raid icon but most of all he is a proud Russian. So what are his emotions at the start? “I’m not a driver anymore and I am a little jealous of the participants”, explains the truck racing legend. The ‘Czar’ and his team have done as skillful a job in organizing the Silk Way Rally has he did behind the wheel. “I am deeply honored to be here at the start of one of the major international races, which originates in Moscow – the capital of my homeland.”

Yuriy Sazonov is one of the rare competitors who will actually sleep in his own bed on the rest day. While the Kazakh will enjoy the break with family and friends in Almaty he knows he has to keep his eye on the prize. “While it is great to be with the ones you love on the rest day, it is crucial to stay focused on the race. But it will also be with tremendous pride to compete on home soil and in front of our fans.”

Following his many national titles in China, Han Wei is making his international rally-raid debut and is eager to face what lies ahead  “As a pilot, I want the challenge the toughest Rally in the world offers”, says the man affectionately known as General Han. Mr. Wei is keen to lead his country’s contingent to the finish line. “As a Chinese pilot, I’m looking forward to see the successful finish in Beijing.”

Tomorrow, the field leaves Moscow for 853.85km of liaison to Kazan, where a 2km super-special will determine the starting order for stage 2, Kazan – Ufa (626.66km, including 135.78km of special stage on Sunday July 10. 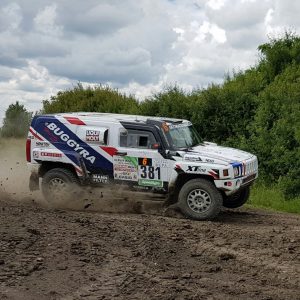 The crew of Buggyra Ultimate Dakar achieved another excellent result in their favourite event, Gyulai Varfurdo Cup, in Gyula,...
Copyright 2011-2016 Rallyraid.net - RISE Network. All Right Reserved.
Back to top