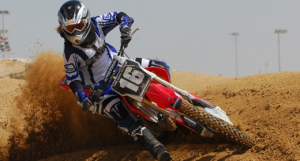 Brittany Erasmus will join the ADDC for first time

While the likes of Leonid Novitskiy from Russia, Spaniard Marc Coma and Stéphane Peterhansel from France are set to take the headlines at this year’s Abu Dhabi Desert Challenge, four women are looking to make their mark as they take on some of the world’s toughest and most spectacular terrain, spearheaded by solo contestants Brittany Erasmus and Carmelia Liparoti Baggiani.

At just 20 years old, UAE-based Erasmus will tackle the demanding desert challenge for the very first time, while Baggiani, from Italy, already has two cross-country rallying world titles to her name. The women’s contest will be a battle of youth versus experience, providing spectators with yet another strand to this thrilling competition.

“Last year, the FIA established the Women & Motor Sport Commission, which is designed to promote the involvement by women in all aspects of motorsport. The participation of Brittany and Carmelia in the Abu Dhabi Desert Challenge demonstrates that, for many women, the passion for racing is there,” said Mohammed Ben Sulayem, president of the Automobile and Touring Club for the UAE (ATCUAE) and vice-president of the FIA. “I wish all of them the very best of luck; their participation alone proves that cross-country rallying is not a sport reserved only for men.”

Erasmus has never competed in a long-distance rally, and is jumping in at the deep end by making her debut at the demanding Abu Dhabi Desert Challenge on a Honda CRF 450 X. The South African has been a resident of Dubai for 13 years, where she attended the English College, meaning she has an extensive local fanbase to count on for support. With this in mind, the enthusiastic university student is more than ready to face the gruelling contest head on. 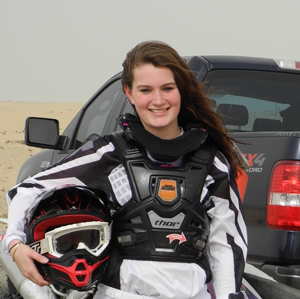 “I am constantly picturing myself coming over that finish line on the last day of the Abu Dhabi Desert Challenge, imagining what I am going to feel like and look like,” she said. “I am not the type of person to give up when things go wrong or get difficult.”

Certainly, Erasmus is no stranger to coping with difficult situations. In 2007, she suffered a major setback to her rallying career, breaking her femur on a desert ride, which kept her out of the sport for nine months. However, after substantial physiotherapy and two operations, she was ready to ride again, more determined than ever to get back to racing.

Despite her age, Erasmus has plenty of experience of the stunning Western Region desert across which she’ll be racing. She initially trained at motocross events, but increasingly found herself on desert rides, which inspired her to take part in the Abu Dhabi Desert Challenge, where she will be racing alongside her father. “We decided that 2011 was the year for me,” she said. “It’s been a bit difficult with me being at university, but it has taught me to grow up and take control of my own training.”

In stark contrast, the experienced Baggiani, the most experienced female quadbiker in the field this year, has taken on and completed the Abu Dhabi Desert Challenge twice before. Over the past two years, she has participated in the Pharaoh’s Rally in Egypt, the Tunisia Rally, the Rally of Sardinia and the Dakar Rally, being crowned women’s champion of the FIM Cross Country Rallies Championship in both years. 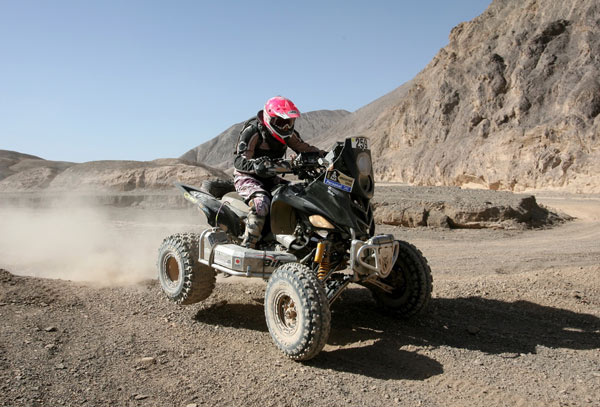 Riding a Yamaha Raptor Black Storm quad bike, Baggiani is looking to improve on her impressive record, while also inspiring other women to become more involved in motor sport. “I love taking part in the Abu Dhabi Desert Challenge. The organisation is great and friendly, and it has outstanding stages in the magnificent desert,” she said. “Taking part in rallies has been a dream of mine since childhood – I am living my dream! I hope that my presence will inspire more ladies to enter the Abu Dhabi Desert Challenge and other races.”

Two other female contestants will be taking part at this year’s Abu Dhabi Desert Challenge. Sheila Hutton-Barker, originally from the United Kingdom but based in the UAE, will compete in a Nissan Patrol as co-driver to her husband Ian, while Eva Vykydalova will also compete as a co-driver. Representing the Czech Dakar racing team, she will race alongside her Czech compatriot Jiri Janacek in a Toyota LC120.

The Abu Dhabi Desert Challenge is a world-class cross-country rally that attracts some of the most famous rally drivers and riders from across the globe. It will take place from April 1-7, and consists of four categories: bikes, quads, cars and trucks.

The Abu Dhabi Desert Challenge is organised by the Automobile and Touring Club of United Arab Emirates (ATCUAE) under the title sponsorship of Abu Dhabi Tourism Authority (ADTA), and is held under the patronage of HH Sheikh Hamdan Bin Zayed Al Nahyan, the Ruler’s Representative in the Western Region.

The 2011 edition of the rally is backed by a high-profile line-up of sponsors and supporters that includes Al Gharbia, ADNOC, Rotana – Yas Island, Al Ain Water, TAG Heuer, Explorer and Nissan – the all-terrain Nissan Patrol, dubbed ‘The Hero of All Terrain’, is the official vehicle of the Abu Dhabi Desert Challenge. Meanwhile, a landmark partnership with Eurosport TV will see daily global broadcasts of all the 2011 Abu Dhabi Desert Challenge action. 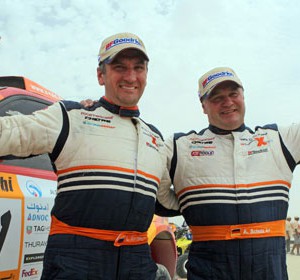 The last year winner of “Abu Dhabi Desert Challenge”, Russian pilot Leonid Novitskiy will be on the start of the race...
Copyright 2011-2016 Rallyraid.net - RISE Network. All Right Reserved.
Back to top