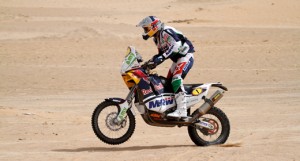 Marc Coma proved that he is as a formidable a competitor as ever by coming home after just 1h 27m 55s on his factory KTM 450. He rounded off an excellent opening day for KTM, which saw three bikes finish in the top five.

UAE competitor Khalid Al Falasi, riding for Team Al Yasi, managed to score an impressive first-day result for his country, finishing the day in eighth. Al Yasi was a mere 16 minutes behind Coma and looks set to live up to his name as the competition’s most successful Arab rider.

In the quads category, it was the UAE’s Atif Al Zarouni who crossed the line first, beating closest rival, Luis Henderson of Uruguay, by four minutes. Briton Nicholas Black rounded off the quads top three, clocking a time of 2h 3m on his Yamaha Raptor. 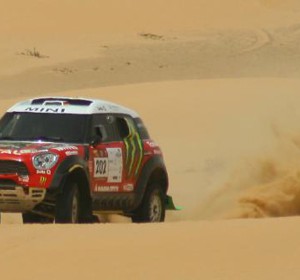 No one had too much to say about the prologue, but if anyone had a free and easy smile on their face yesterday it was ...
Copyright 2011-2016 Rallyraid.net - RISE Network. All Right Reserved.
Back to top