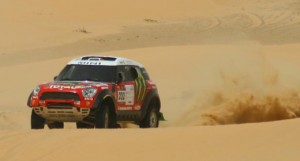 Peterhansel win the first Stage with the Mini All4

No one had too much to say about the prologue, but if anyone had a free and easy smile on their face yesterday it was  wiped off clean off today… The bivoauc looks like a battlefeild with mechanics clambouring over cars and hitting pieces of metal with large tools. Looking at the provisional timesheets it seems that the killer first stage wiped out almost half of the field… including both the G-Forces, Gadasin rolling heavily after just 4km…

Even the stage winner, Stephane Peterhansel in the Mini had a hard time making it look easy. “The last time I was here was in 2007 and I forgot how hot it was here. I was really uncomfortable in the cabin.” Still, he was some 7 minutes ahead of X-Raid team mate Leonid Novitsky and some 17 ahead of third placed JL Schlesser. 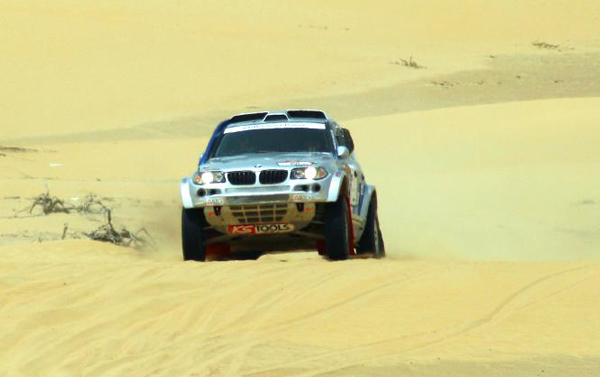 The camp is full of contrasts. Some cars are just beeing dusted, while others are being rebuilt. To the drone of big diesel generators and the whine of angle grinders I walked around trying to find out what happened in the stage. 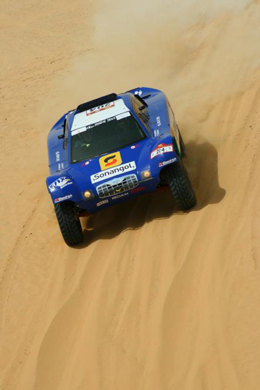 Schlesser feel better in the desert than Italy

A good contrast was next door to the X-Raid team. When a mechanic was putting some sticky tape over the loose light on the body Malcom Anderson was repairing the damage of a wheel that came off at 110km. “Possibly the bolts weren’t set in the wheels properly and with all the shocks on the track they worked loose…” He showed me the twisted wheel arch and dented door. “We were very lucky that we didn’t roll it!” But Malcolm is a very positive guy and said, “This is an endurace event and it’s only the first day so there is a long way to go. We just need to do everything to prevent any more penalties and when other people have problems we’ll start to creep back up and I don’t think the top 10 is out of reach.”

Nizar Al Shanfari in his stricking buggy was a little to enthusiastic 40km into the stage and over-revved the engine which, in his words, “Popped a cylinder.” He tried to carry on but the engine only lasted another 20km before giving up completely. He is still all smiles though and a new engine is on it’s why why the mechanics are busy in the floodlit sand stripping the old one out.

The Saluki team didn’t make it through the first day either. The exhaust manifold heated up the straps holding the spare wheel and when it got too hot the wheel caught fire… not something you’d notice while driving flat out over the tricky dunes and the first indication of something being wrong was when the engine cut out because the accelerator cable had melted.

And G-Force… Yesterday I wrote about what effort it took the team to get here with all the paperwork, flying the cars out, shipping the T5 service truck, renting the chase cars… all for 4km. The only word I can think of is ‘tragic’. A flat out blind kink caught Boris out and the car rolled heavily, deranging the back axle so much that it was impossible for him to drive out. 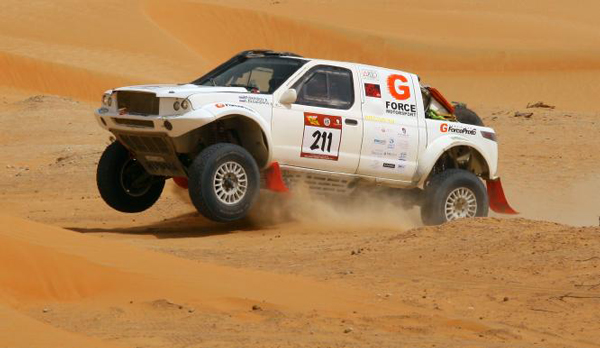 Team mate Roman Briskindov didn’t get too much further before his steering broke and because he was unfamiliar with the mechanics of his rented car it took him a few hours to effect a repair. But at the first CP he was in an incredible 4th place, just behid Schlesser.

And for some good news… just as I watch G-Force’s Marina running passed the media center window. Fady Melki, who I am told is a really nice guy as I haven’t actually met him yet, is in 10th in his beautiful looking ‘Classic Sport’ Range Rover and amazingly in 6th, driving without a co-driver and with only one eye is local expert Saeed Alhameli in his T2 Nissan Patrol. He was also nowhere to be seen this evening, but I will catch up with him later.

So, going into Day 2 and the leadrboard already has a look of finality about it. Another 290km awaits the first day’s survivors and those who made it back to camp are allowed to start again, and with their stage times perhaps show what might have been. The Saluki Predators, Al Shanfari’s Buggy and the G-Forces will all be back out, although near the back of the field, but as today has proved, there is a very long way to go…

I will be sleeping on top of the G-Force service truck tonight trying to see the stars through the thick cloud of dust that hangs over the camp. 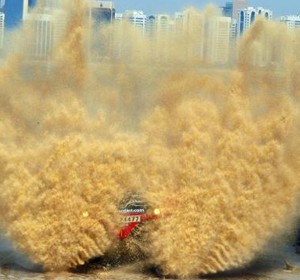 Considering theat there are almost 1000 grueling kilometres of desert tracks in one of the world's most inhospitable places...
Copyright 2011-2016 Rallyraid.net - RISE Network. All Right Reserved.
Back to top