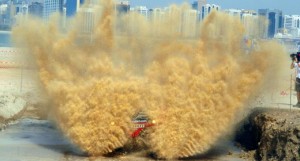 Considering theat there are almost 1000 grueling kilometres of desert tracks in one of the world’s most inhospitable places coming up in the next 5 days, a 2km track around a building site might not mean much… but it serves two purposes; it provides the local spectators withe some close up action, and more importantly for the drivers, sets the running order for tomorrow. A couple of corners to kick up the dust, a high, but easy ramp and a little water-filled trench made up the course, but the backdrop of the Marina and the forest of skyscrapers made for some stunning scenes.

The cars were flagged off in reverse order so the large but robust Land Cruisers and Patrols that seem to have a traditional place at the back of the Rally-Raid field came first, struggling to grab the right gear and slewing around the tight corners withe masses of understeer. Then came the lovely looking deep blue Classic Range Rover of Brit Malcolm Anderston, taking it easy through the watersplash because of the sensitive V8 electrics.

Prize for the most original vehicle has to go to Fady Melki in what at first appears to be a new Range Rover Sport… but something about it doesn’t look quite right. And when you see the solid axles underneath and the thick chassis you can see that the local Land Rover dealer has come up withe a novel way of promoting his product. A new bronze-coloured Sport shell in on a classic Range Rover chassis.
Class! 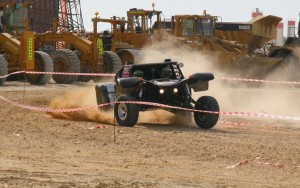 Sounding like an angry hairdrier buzzing around the course were the two Team Saluki Predator buggies, Mark Powell making a landing over the jump theat a Red Bull X-Games rider would be proud of. For compactness and better weight distribution the Predators have a belt drive from the engine to a remote gearbox… a little like a Unimog… The Italians blasted around to finish in 13th place while Powell took a calmer approach… but although he was only 7 seconds slower, the tightness of the field meant that he will start in 25th position.

An 80 Series Land Cruiser withe a beautiful front end came through rather sedately, but then, as far from sedate as you can imagine came Roman Briskindov in his rented G-Force Proto. You won’t have heard his name before, he’s only done a few rallies in his native Russia, but after some intensive training with G-Force team leader Boris Gadasin it seems he’s learnt how to drive on the absolute limit. It was a masterful display, always sideways, always committed and his effort was rewarded with 4th place. The advert G-Force use to advertise their rentable Proto is ‘Live the Dream’ and from his huge smile at the finish it seemed he was… especially as he beat Gadasin in the process. 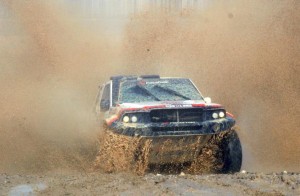 Boris himself was a little preoccupied with entertaining the crowd, putting more air than anyone else under the car on the jump and then doing a neat trick of digging into a deep rut to tip the car on two wheels so everyone could see the large letter G on the roof.

But just like the teacher in my mental healthecare training course use to say, it’s the quiet ones you have to look out for. In a seemingly unassuming drive, wheels on the ground over the jump, not so much dust or powersliding, Stephane Peterhansel demonstrated that the secret to a good time is in driving smoothly… and was an incredible just under 5 seconds faster thean anyone else, his team mate coming in just 0’01 head of the Czech team of Miroslav Zapletal in his Mitsibushi.

Lumbering around like a herd of panicked and disoriented elephants were the theree Kamaz trucks and as Ayrat Mardeev explained, “It’s not what Kamaz is made for. The route was so tight and tricky… just for people to see, so what can you do? See tomorrow!” 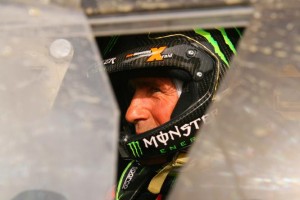 So the rally proper starts tomorrow with 290km of low dunes. Peterhansel’s Mini heads off ino the horizon first as the leading X-Raid car and the two G-Forces will follow… with Briskindov having the unexpected luxury of being able to follow his team leader rather than trails of camel shit… 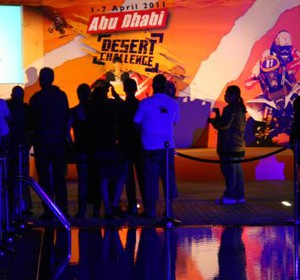 The Taj Mahal, they say, was built as a monument to love. The Eiffel Tower stands tall as an example of structural engineering...
Copyright 2011-2016 Rallyraid.net - RISE Network. All Right Reserved.
Back to top