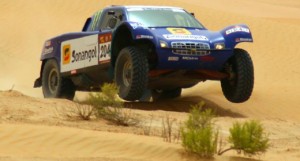 After the devestation of the leaderboard yesterday with so many tales of woe it seemed that the leading positions were already set… but the Abu Dhabi Desert Challenge is a Rally-Raid at the far end of the extreme scale… and nothing can be taken for granted.

It was a very positive scene this morning with both the Saluki Preditor buggys up and running again as well as the G-Forces, with Briskindov making the start marshalls laugh at his eagerness to head off into the sands and Al Shandari being towed to the control with his buggy missing most of its back end… including the engine… In fact everyone bar one re-started today, although with wildly varying burdens of penalties. 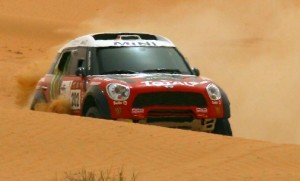 The sun is baking. I apply more suncream to my roasting forarms and wrap my headscraf tighter around my face and neck, but I am sweltering. I can feel my lips beginning to crack in the dry air and my feet are hot because of the heat of the sand curning through the bottom of my shoes. They say it’s 36 degrees, but it feels hotter… and I am complaining yet all I am doing is standing still on a dune near the end of the stage… the guys I am taking photos of have just been driving flat out for nearly 300km in this heat… and I am worried about how hot my camera is getting… What these guys must be going through is incredible! The bikes and quads scramble passed but then there is a roar of a big angry V8 and I have the idea that Gadasin has avenged yesterday’s ignominious roll by blitzing the field… but it’s Schlesser’s blue buggy that comes into view… both the X-Raid cars are missing… 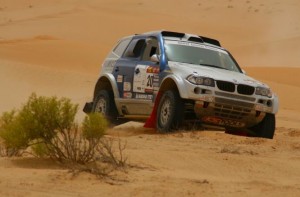 …Back in the camp, wondering around with my notebook and pen, I find out why… Stephane Peterhansel got properly stuck in the dunes and the only way he could have continued was with help… help which came from his team mate Leonid Novitsky. That left Schlesser to take the win by 8’41, although Peterhansel still has a 4’36 advantage over Novitski and 9’11 in hand over Schlesser.

Behind the main battle Mark Powell in the Saluki Preditor had a brilliant day, finishing in fifth, but behind the easy smile was obvious exhaustion. “The stage was gnarly!” he grined. “Lots of short, sharp dunes intersected by huge rolling plains and treacherously bumpy salt flats… and this is where we did well… apart from the fact that I am a most excellent driver (joking) the Preditor’s long suspension travel worked really well where other cars would have been knocked sideways. The best feeling though was overtaking everyone, as we started in last place, counting them all off, apart from the Kamaz though, they’re a bit hard to get by as they don’t usually just move out of your way.” 5th place is impressive enough, but they lost nearly 30 minutes trying to help the customer sister-car. “We were 47 minutes behind Schlesser in the end… not bad for a 2.2 liter car,” he said with a satisfied smile. 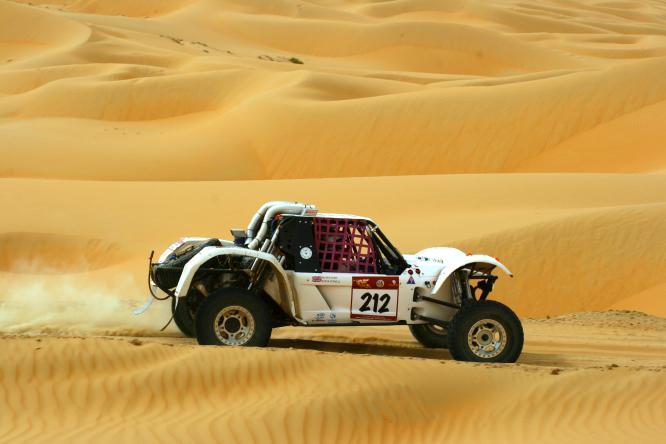 They might be parked next to the X-Raid tent, but Malcolm Anderson’s Range Rover team is worlds apart. “It’s a bit extreme out there,” he said with a distant look as he began to explain why he didn’t make it out of the stage, “Before CP1 we could hear the tappets rattling and saw there were having some issues with the oil pressure, and as we had such a long way to go we made the hard decision to stop and save the engine…. 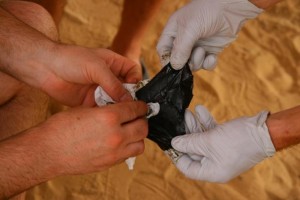 Do you know what this is?” he asked, holding the oil sump pick up pipe. “This was stuck in it, he said showing me a slice of latex that looked suspiciously like a part of a rubber glove. “It was stuck in the filter. No wonder we had trouble with the oil pressure!” In fact it turned out to be something called a valley gasket (No, I don’t knwo what that is either…) and team members were sent out around the camp hunting for a replacement…

Sitting next to the Range Rover team during thier tea brake was the elusive Fadi Melki, creator of the ‘Classic Sport’ and the previous days 10th placed driver. “I hear people telling me that this is harder than the Dakar, more intence, but the secret to the Desert Challenge is that it is an endurance event, all these people who didn’t finish yesterday, with how many was it because they were just trying too hard? The track is so difficult, so full of traps that when you are at 100% you have no place to make a mistake, so getting a corner or a dune wrog will cost you 10 hours, not a few seconds.” Experience does count. With 6 or 7 events to his name, he’s not quite such how many, Fadi knows that patience matters here and despite being stuck in 3rd gear yesterday and loosing the brakes today he is up to 9th overall. 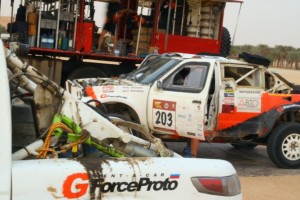 Someone not so patient today was rally-raid newcomer Roman Briskindov in the rented G-Force… At CP1 he was continuing to impress everyone on his debut by being in 8th place, but a small lapse in concentration meant that he caught a dip wrong and the G-Force Proto flipped onto its roof. One of the friendly Kamaz drivers stopped to pull them back on their wheels but although the damage looked pretty superficial, one of the ducts of the transmission coling system was crushed. Sensibly he decided to call it a day and drove slowly back to the camp to get the damage repaired without it causing any more problems.

Team leader Boris Gadasin didn’t fare much better today either. Before heading out to the stage I was watching him on the online timing screen and after around 50km he’d caught and passed JL Schlesser and looked to be on course for an amazing result, but it was a small thing that caused his downfall… the A/C was broken in yesterday’s roll, and although a few people laughed at this, when the cabin temperature is 65 degrees, up to 68 at one point… while wearing a thick racing suit… and controlling a 400hp monster at 160kp/h on the sand… He made it as far as CP3 before admitting defeat and was treated by the rally doctor for heatstroke. The A/C in his hotel works fine though and both G-Force drivers will be back at the start tomorrow.

Another team learning the hard way how tough this event is are the Latvian / Kazaksthania Mebar-Auto Team. Their big yellow Toyota was built in just 6 weeks and was finished on the same day as scruitineering, so the first day’s stage was where they tested the truck’s weaknesses. They limped around with overheating issues, which were solved just by sealing the radiator cowling… by sacrificing their metal camping table to make a mounting for the fans… Today they did well and finished the stage in 8th and are a very commendable 6th overall, sandwiched between the two French Fitech Nissans.

Tomorrow the day will be split into two stages. Nizar Al Shanfari has finally got a new engine in the back of his buggy, although the 50 hou penalty they recieved for changing it means that they have approximatly 3 days worth of time penalties to overcome to catch the second last person..

To end on a good note I would like to say thank you to a few people. First the UAE police force. Yesterday I was roasting in the sun, sweating off my sun cream so I jokingly pointed to the back seat of their Nissan Patrol that was parked with its lights flashing. “Come, come, my friend,” they both smiled and opened the cool box to offer me some ice cool drinks and half-frozen chocolate. But their hospitality didn’t stop there. The more superior of the two got out and cleaned the door window for me so that I could take photos of the cars cresting the dune without having to wind it down first. Class. There will be a few Russians reading this with bewilderment…

Also to Daniel Francois from DanFrank Catering for making us haggared press people feel like little shieks in in the open-air courtyard of the little fort in the camp and for keeping the plate next to the coffee machine in the press tent well stocked with biscuits.

And to Al Ain who are supplying us with free water. 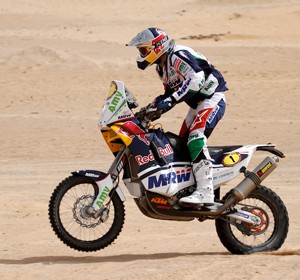 Marc Coma proved that he is as a formidable a competitor as ever by coming home after just 1h 27m 55s on his factory KTM 450....
Copyright 2011-2016 Rallyraid.net - RISE Network. All Right Reserved.
Back to top