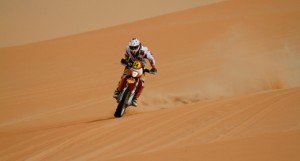 Rider Sam Sunderland of the KTM-UAE Rally Team today broke an Abu Dhabi Desert Challenge record by coming first in Leg 2 of this year’s rally, and, in the process, becoming the youngest ever rider to win a stage. The 21-year-old Briton completed the stage in 4h 10m 15s, more than 13m faster than world champion Marc Coma.

The second stage of this year’s Abu Dhabi Desert Challenge, named ADNOC, kicked off 36 kilometres north of Mezaira’a, before heading deep into the famed Empty Quarter desert for 413 kilometres of gruelling cross-country racing.

Sunderland’s outstanding result now puts him up to eighth place overall in the bikes category standings. It will also mean that he will lead the pack from Leg 3’s Tharwaniyah starting point tomorrow.  “The fact I came first is awesome,” said Sunderland, who lives in Dubai. “I had a few problems with the bike, and I made a navigational mistake, but overall, it went really well. I had a much better ride than I did yesterday.”  Sunderland completed the ADNOC stage almost perfectly, only suffering a couple of setbacks. One was a small navigational error that sent him two kilometres off-course, though it was small enough to allow him to hold onto his lead.

He admitted that, as a rookie at the Abu Dhabi Desert Challenge, he still had a lot to learn about navigation. “There’s so much going on while you’re out there,” he said. “You’re trying to worry about dune speed, navigation and other competitors. I race motocross normally and, comparatively, this rally is so dangerous, it’s unreal.”

Sunderland’s ADNOC stage today was not made easier by problems with his KTM 450 rally bike, which had, he discovered when reaching the refuel station, been leaking coolant. The bike was easily fixed, and he continued without losing too much time to secure the stage win and break the record.

In the quads category, it was the UAE’s Mohammed Al Shamsi who took the top honours, having beaten yesterday’s favourite, Atif Al Zarouni, by more than 30 minutes. Luis Henderson of Uruguay gained another second place, while Italy’s Stefano Dalla-Valle came in third.

“What was great about today was that we had the youngest bike rider ever to win a stage,” said Ronan Morgan, clerk of the course. “It was a very difficult day because of the length of the stage, but it went very smoothly.” 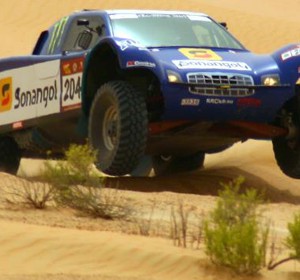 After the devestation of the leaderboard yesterday with so many tales of woe it seemed that the leading positions were already...
Copyright 2011-2016 Rallyraid.net - RISE Network. All Right Reserved.
Back to top