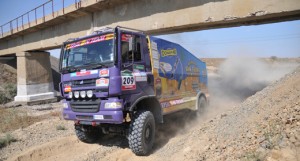 Next July, the Silk Way Rally will start with a stay in Moscow, where the drivers will discover the Luzhniki Stadium, the hub of the 1980 Olympic Games, then Red Square. For those who finish this adventure, they will be immersed in this Olympic theme right to the end, with the finish in Sochi, the host city for the 2014 Winter Olympics.

During the 1980 Olympic Games, some of the Silk Way Rally’s participants will have surely been glued to the images of the 800 m and 1500 m finals, where after two exciting battles Sebastian Coe and Steve Ovett shared the honours. Others will have enjoyed watching the haul of medals by Russia’s Alexander Dityatin, the first male gymnast to score a 10 in an Olympic event, who triumphed eight times in total during the entire competition. None of them will have had the slightest inkling that 31 years later, they would be making their own appearance in the bowels of the Luzhniki stadium behind the wheel of a rally car or truck, readying themselves to cross Russia. And yet, it is indeed this prestigious arena that will play host to technical and administrative scrutineering for the Silk Way Rally on 8th and 9th July.

The following day, the visit of Moscow will continue with the starting ceremony organised on the must-see site of Red Square. For the moment, the issue of where to place the podium on which the crews will receive the encouragements of the crowds has not been finalised. Behind the parade of vehicles, will the photographers from the major agencies be given the backdrop of the Kremlin or Saint Basil’s Cathedral? The compilers of the road-book already have a tricky choice to make. Etienne Lavigne, the Director of the Dakar and the Silk Way Rally, is delighted, whichever option is chosen, for the race to start in such a majestic setting: “I’m already sure that for those who will be there, it will be an unforgettable moment. The site is magnificent and ideal for a spectacle that is both celebratory and formal”. After the concert and firework display scheduled for the evening, the competitors will be seeking more thrills on Russia’s tracks. 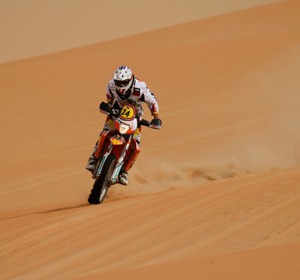 Rider Sam Sunderland of the KTM-UAE Rally Team today broke an Abu Dhabi Desert Challenge record by coming first in Leg 2 of this...
Copyright 2011-2016 Rallyraid.net - RISE Network. All Right Reserved.
Back to top