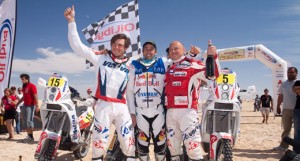 It is in the magical setting of the dunes of Nafta, a stone throw from the film set of Star Wars, that the Oilibya Rally of Tunisia 2011, the thirtieth edition, saw its last round of races. The competitors had to complete two loops of about sixty kilometres before crossing the finish line. Champagne for Portugal’s Helder Rodrigues (Yamaha 450 No. 3) who won the bike category just in front of the Poles Jakub Przygonski (KTM 450 No 15) and Jacek Czachor (KTM 450 No. 5).

Third in Dakar second in Abu Dhabi, a few weeks ago: Helder Rodrigues, is decidedly getting better and better in the World Championship rallies. The Portuguese driver picks up the trophy after six days of perfect control, overcoming the uncertainties of the ever changing terrain, after which he beat the Poles Jakub Przygonski (n 15) and Jacek Czachor (No. 5) Orlen Team KTM, and also grabbing the head of the provisional FIM World Championship. The big uncertainty on the eve of this grand finale concerned mainly the third step of the podium. But a stage win was not enough for Jordi Viladoms (Yamaha 450 No. 4), to recover in from a disastrous start to the rally, marked by fuel supply problems.

OPEN: One name to remember: Marek Dabrowski
Completing the reign of the Polish pilots in the Oilibya Rally of Tunisia, Marek Dabrowski (KTM 690 No. 100) wins the Open title for the Orlen Team KTM by beating Tunisia’s Anis Nabli (KTM No. 103) and the Turkish Kemal Merkit (KTM No. 101).

ENDURO CUP: BOURGIN IS NUMBER ONE
He suffered a severe fall in January, but Thomas Bourgin (Husaberg No. 253) was nevertheless in the Dakar and in the Africa Eco Race, despite a broken pelvis. The experience has certainly helped the pilot from St Etienne (France) to maintain a surprising regularity in the Oilibya Rally of Tunisia. Leading straight from the early days, he has shown good rhythm and an unusual wisdom to win in the Enduro Cup category, while placing himself in the top 6 final scratch rankings. Also on the podium, the Italian Edoardo Pierro Mossi (KTM No. 250) followed by Xavier Moreau (KTM n ° 252), same position as last October in the Oilibya Rally of Morocco.

QUADS: Dmitry Pavlov is the best…
Third in Abu Dhabi, the hefty Russian Dmitry Pavlov (Honda) also took this Oilibya Rally of Tunisia 2011 by storm .And therefore gets to the top of the World Championship in this discipline… Literally cruising to victory in Tunisia this week, the “ogre from the east” has owned this competition, leaving only crumbs to his poor opponents …

Helder Rodrigues (Por / Yamaha No. 3) : “This is a great and very intense joy. I have been waiting a long time for this moment. I want to thank all my partners and the people who believed in me. If I’m here today it’s mainly thanks to all those people. It is obvious that my season starts in full force. All this is very positive in the preparation of the Dakar 2012 … ”

Jakub Przygonski (Pol / KTM 450 No 15) : “I would firstly like to congratulate Helder for his wonderful and deserved victory. He managed to make a difference at the start of the penultimate stage. It was close, but I still lack experience to maintain this level throughout the duration of a rally. I am particularly pleased that the team Orlen completes the podium with Jacek’s 3rd place … ”

Jordi Viladoms (ESP / Yamaha 450 No 4) : “I am pleased to have won this last leg, on the other hand, I regret not being able to express my full potential on this rally as a result of my mechanical problems early in the week … ”

Marek Dabrowski (Pol / KTM 690 No. 100) : “It’s really a great day for the Orlen team. Jakub, Jacek and me on the podium and winning the Open class: I think our partners will be very proud of the result on one of the toughest African rallies of the season…”

Anis Nabli (Tun / KTM No 103) : “Thirteen is my lucky number! This is my 13th appearance and here I am on the podium in the Open class for the 30th Oilibya Rally of Tunisia which, as you know, is of particular importance for us, Tunisians … ”

Bourgin Thomas (Fra / Husaberg No. 256) : “I honestly did not expect such a result when taking the start. I came here to gain experience and all I can say is that I’m successful … and well beyond my expectations … ”

Jago Pickering (GB / KTM No. 254) : “I loved this rally, a lot of sand, and that is the big difference with the Oilibya Rally of Morocco, that I did last year and hoping to participate again this year. Africa is great place for the Rally raid sport, and bivouacking in the middle of nowhere makes for an all in all very positive experience. “

Bruno Bony (FRA / KTM No. 102) : “Unfortunately, I was forced to withdraw on the eve of the arrival. Too much sand in the air filter is the worst reasons to give up. But the rally was nonetheless beautiful. The scenery was beautiful and exiting specials all the way , It was an example in terms of organization …” 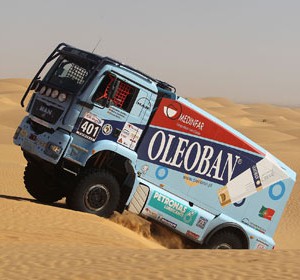