Hungarian cross-country committee had a meeting on Tuesday where the members decided to open the championship from 2012. It means that foreign competitors can also collect points on races, even they can be a Hungarian champion!

It takes almost 20 years since there is an official cross-country championship in every year in Hungary. Unfortunatly the number of the competitors has been fallen down in the last years because of the ecomonic crisis and the increased costs of racing. If a team wants to have a really good car with they can achive one of the podium places it has to invest a lot of money during a season. By the countries in the neighborhood the championships are already open, so it is a decision in time in Hungary too. 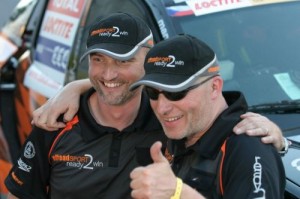 In 2012 and the coming years the Central European countries (Poland, Slovakia, Czech Republic and Hungary) are planing to co-operate more on their events. If they have rallies together where everybody can collect points in every championships, there will be more entrants on each race and it should be more exciting for the funs and even the competitors too.

The X-raid Team makes the trip east to the Polish city of Szczechin to take part in this weekend’s Baja Poland. Situated...
Copyright 2011-2016 Rallyraid.net - RISE Network. All Right Reserved.
Back to top