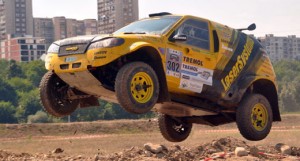 The team is through the first half of Balkan Offroad Marathon. After the past four race days the rest day is for reparation because HAWKIA has got really worn out on the steep and rocky mountain stages. After 630 km of specials the crew of Sólyom Team, Olivér Sólyom and Mátyás Galbács occupies the seventh position overall.

So far Balkan Offroad Marathon didn’t pamper the competitors with fields, all teams have technical problems. From every inch of the assistance park in the centre of Kardzhali the sound of grinding, drilling and carving can be heard. The rally field, that consists mostly of Mitsubishi Pajeros, has most of its problems with suspensions, also on HAWKIA this is the most damaged part. The front differential and the range-gearbox was changed in Orestiada, Greece by the team’s mechanics, now it’s the turn of the rear half-axles, wheel bearings, gearbox and brakes.

On Friday, the day after the rest day, the rally continues with four specials of 30-40 km each.

Olivér Sólyom: „The terrain here is fantastic, it can’t be compared to anything I’ve experienced so far. In the the tracks are mountains rocky, stoney and sometimes the trails can hardly be seen. Many times the cars gathered at the top of a mountain and went around for hours until someone found the right direction. We still have two hard days in front of us, and we will fight for the result until the end. This is a very very good rally!”

Mátyás Galbács: „Despite of the precise roadbook navigation is very difficult, but this is the good thing in cross-country rally which is actually called off-road in Bulgaria, I say this just to avoid misunderstandings. We have to cover a distance equal to that of the Hungarian round of the World Cup every day, 300-400 kilometres on a difficult and varied terrain. Sometimes something breaks down in the car, then we stop, repair it and then go on. The locals honor our persistence as a lot of competitors withdrew already. We try to finish the rally somehow and we hope for a good result.” 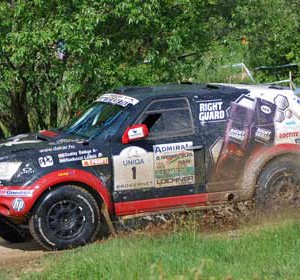 Hungarian cross-country committee had a meeting on Tuesday where the members decided to open the championship from 2012....
Copyright 2011-2016 Rallyraid.net - RISE Network. All Right Reserved.
Back to top