Barreda and Ten Brinke make it to the top

The longest and probably the most beautiful stage of the Rally of Morocco OiLibya 2011, was as spectacular as expected … 338 km of off-road madness with a wide variety of terrain and breathtaking scenery, this special was full on, navigation was tough, but the rewards were extraordinary: once through the April pass it was a straight line to the finish. 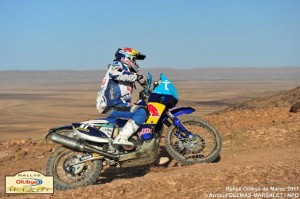 BIKES : Helder gets lost and looses 21 minutes!
Marc Coma No 3, KTM 450. Has no more sporting ambitions on this OiLibya Rally of Morocco because of his technical problems of the first stage, the multiple world champion just had a perfect test day for the Dakar.
The feat of the day is yet again signed by his young compatriot Joan Barreda (Husqvarna 450 No. 12). Since Monday, and the first stage, the Valencia prodigy arising from motocross, signed his second stage victory and seized the overall lead. Best of all, his team-mate Paulo Gonçalves (Husqvarna 450 No. 10),in second place gives his Speedbrain team the top two places overall. And if Jakub Przygonski (KTM 450 No. 2) and Frans Verhoeven (450 Sherco, No 4) do well, Helder Rodrigues, meanwhile, lost a few feathers in the maze of the Draa Valley. Victim of a navigational error, the Portuguese, leader of the race, conceded more than 20 minutes and fell to the fourth place overall. There are now six drivers, less than twelve minutes apart in the top 6 ! Another major victim of the day was David Casteu (Yamaha 450 No. 6),he suffered electrical problems and stopped his race on the edge of the tracks, He will nevertheless be able to start tomorrow, as authorized by the regulations of the rally.

Two out of three for Thomas Bourgin (Husaberg 450 No. 250), 14th in the scratch of the day, he confirms his advantage in the Enduro Cup. Already winner in this category in the OiLibya Rally of Tunisia, he is now ahead of Joel Vidal (KTM 450 No. 257).

In Quads, the Russian Dmitry Pavlov (Honda No 264), looks set to achieve a beautiful double act. Overall leader, he also largely dominates the category with his Honda Enduro Cup Series. Today, the Russian took advantage of Vincent Albira’s (Honda) mechanical problems who made it to the finish line behind the Can-Am of the Bulgarians Vachkov (No. 202) and Cenkov (No. 200 °), he is now relegated to more than two hours in the overall . 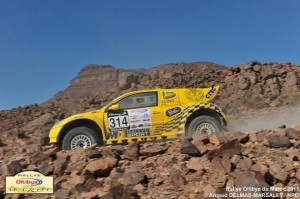 CARS : the MINI’s retire, MD Rallye Sport ambush
In the car category, the big news of the day, is of course, the MINI Team X-Raid.big favorites of this OiLibya Rally of Morocco, are out. They will keep the status of No1, at the start of the next Dakar since the official withdrawal of Volkswagen; the MINI did not resume the start of the third stage this morning.  Officially, a manufacturing defect in the oil pumps causing the engine (a BMW 3-liter twin-turbo) to falter. After the withdrawal of Nani Roma on Monday and Leonid Novitsky , yesterday, the X-Raid team wanted to avoid any mishap for the last remaining MINI , that of the Portuguese Ricardo Leal Dos Santos.

With the mini’s gone , all eyes are turning to the Mitsubishi Racing Lancers, from the Netherlands. Leaders from day one, the Dutch rally driver Bernhard Ten Brinke reinforces his advantage  With an almost perfect navigation from the Frenchman Mathieu Baumel, Ten Brinke signs an impressive two out of three! Another great performance, for the MD buggy Rally Sport No. 309 of Regis Delahaye and Eugenie Decré. Back in the forefront yesterday in the double loop of Chegaga, the French duo can now smell the exhausts of the Racing Lancer .So what about the performance of the proto Oscar No. 327?, well Jean-Jacques Radelet and Jean-Claude Kaket are in third place of the day, just in front of the Optimus buggy of Pascal Thomas and Pascal Larroque (No. 311) and the BMW X3 No. 304 of Boris Garafulic and Gilles Picard.

As for Orlando Terranova and Lucas Cruz (Toyota Hilux Pickup No. 302), who’d left in the lead this morning, and then broke a tie rod, had to concede almost 1h20.

In the T2 category, the duel between Toyota continues : the Spaniard Xavier Foj (No. 329) finishing just ahead of Bruno Sandrini (No. 330) and Ivan Banaclocha (No. 338). Overall, Foj still leads dance infront of the Frenchmen Genovini (No. 332) and Mognier (No. 336). 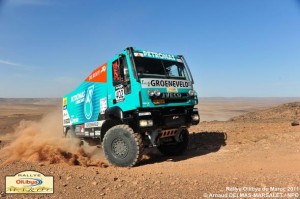 TRUCKS : Miki Biasion reacts
Deprived of a stage victory on Monday following a road penalty, Miki Biasion (IVECO No. 402) signed his first stage victory in the truck category. Gerard De Rooy (IVECO No. 401), playing regularity and always present, Elisabete Jacinto (MAN No. 400) consolidated her third place overall, ahead of the Dutch DAF Van den Bosch (No. 405) and Timmermans (No. 403).

OPEN CLASS
Particularly forceful yesterday in the dunes of Cheggaga and perfectly adapted to their buggy X Predator No. 339,  Jean-Antoineand Sabatier Jean-Luc Redoux sign the best time in the Open category. Overall,  in 13thposition, ahead of the Toyota No. 331 of Jeremiah Choiseau and Arnaud Bonningue. As for the Dutch duo consisting of Jan Van Eijk Hasenbroeck and Maarten Van (Toyota No. 349), they continue  exploring the African rallies while clinging to third place in the category …

Bikes to school Tinfou
As every year this OiLibya Rally of Morocco, the team Cummins France enhance their competitive challenges with humanitarian action. Today, after the arrival of the day’s special,the entire team visited the village of Tamegrout, between Zagora and Mhamid. To prevent children from having to make the ten km trek to get to school on foot every morning in Tinfou, the team brought them ten bikes. Another useful gift delivered this afternoon in an atmosphere of grateful smiles from the students and establishment two computers and a printer in order to facilitate the work in the classroom …
” We’ve been participatingin the Rally of Morocco for years and we often passed this school during the special. That we had at heart this year to provide school supplies for them to
The Headmaster:”We thank the organization of the Rally and the team Peter Rainer Wissmann and Lachaume (Team Cummins) for this action because it is the first time our students have received aid” 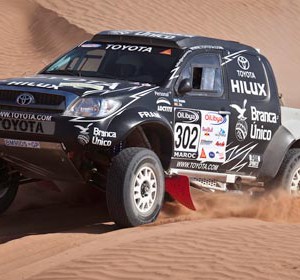 An ocean of dunes extending south of Mhamid, the Erg of Chegaga provided a splendid backdrop for this formidable second leg of the OiLibya...
Copyright 2011-2016 Rallyraid.net - RISE Network. All Right Reserved.
Back to top