An ocean of dunes extending south of Mhamid, the Erg of Chegaga provided a splendid backdrop for this formidable second leg of the OiLibya Rally of Morocco. 133 km loop to be done twice; It was as exciting as promised and full of surprises.

BIKES: Olivier Pain falls and goes …
Because Marc Coma (No. 3) on his KTM 450 had stopped dead in his tracks, yesterday with mechanical problems and therefore took a 4 hour penalty, he left in 11th position this morning , the Catalan champion literally flew over the special by imposing a rhythm of hell on all his opponents, winning the stage more than five minutes ahead of Helder Rodrigues (Yamaha 450 # 1) and more than 7 minutes in front of Joan Barreda (Husqvarna 450 No. 12).

The young Spaniard realized how difficult it is to open the track at a steady pace. So, as Coma and Rodrigues, are the most experienced pilots they did better today. Just Like the Polish Jakub Przygonski (KTM 450 No. 2) and Norway’s Pal Anders Ullevalseter (KTM 450 No. 5), but also David Casteu (Yamaha 450 No. 6) and Frans Verhoeven (Sherco 450 No 4 ) avoid the pitfalls and reinforce their positions in the general. The only real victim of the day is Olivier Pain (Yamaha 450 No. 9). He had already suffered a heavy fall in South America in January and was surprised at km 44 of the first loop. A sudden ‘jump’ and suddenly : severe pain in the shoulder, a damaged bike: all good reasons to reach the finish in a straight line …

In Enduro Cup, Thomas Bourgin (Husaberg No. 250) takes the lead and relegates Joel Etienne Vidal (KTM 257) to nearly a quarter of an hour and Eric Shiano (Sherco 450 No. 251) to nearly an hour and a half!

Reversal of fortunes also in the quads, where the Russian Dmitry Pavlov (Honda 264) takes the advantage over Albira Vincent (Honda No 201) overall. Hicham Choufani (No. 270 Honda) had to turn back after only a few kilometres after a right rear puncture and bending his left front triangle. The Moroccan hopes to repair this evening so as to be on the starting blocks tomorrow. 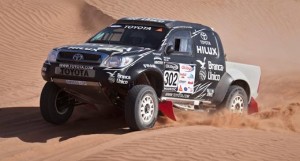 In the car category, the second stage has also had its share of mishaps. And though many amateur crews spent most of their day playing in the huge Chagaga sandbox with shovels and plates, others, not least the best, buried their last hopes.

Triumphant Monday, the Mitsubishi Racing Lancer team coming from the Netherlands felt the pressure. And if Bernhard Ten Brinke (No. 305), winner Monday, retains the overall lead, his teammates lose big time. Starting with Eric Wevers (No. 318), although in the lead at the first CP broke his engine. Ditto for Eric Van Loon (No. 303), who suffered a broken damper and was forced to rejoin Zagora faster than expected.

Leonid Novitsky, broke his gear box just a few kilometres from the finish, the MINI’s X-Raid team has been unlucky . All good news for Orlando Terranova’s Pickup Toyota Hilux (Team Overdrive), his first win in this competition. He beat the amazing Boris Garafulic (BMW X3 No. 304) new to rallying.

The only MINI not yet having suffered mechanical problems : the Portuguese Ricardo Leal Dos Santos completed the podium of the day, just before the team’s MD Rallye Sport buggies with Pascal Thomas (No. 311) and Régis Delahaye (No. 309), particularly forceful in the big dunes of Chegaga.

TRUCKS: De Rooy is getting stronger! 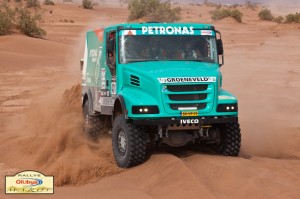 Seventh fastest time of the day (cars and trucks combined) : Gerard De Rooy and his brand new IVECO Powerstar Torpedo move up a gear. Winners of the first stage due to the penalty of teammate Miki Biasion (IVECO No. 402), the Flying Dutchman proved his intractable confidence and efficiency. His father, the famous Jan De Rooy, who came to Morocco to monitor his sons performance, is pleased. One thing is certain, the new IVECO and it’s prominent nose, will be a worthy opponent for the next Kamaz on the Dakar! As for Elisabete Jacinto( MAN No. 400), a single mistake was enough to stay trapped in the sands of the erg Chegaga for nearly half an hour.

Note the excellent 16th place of the day for the SSV Can-Am of Chilean Francisco Lopez, namesake of the famous biker, the mini car, surfing literally in the dunes, throughout the day …

Barreda and Ten Brinke make it to the top 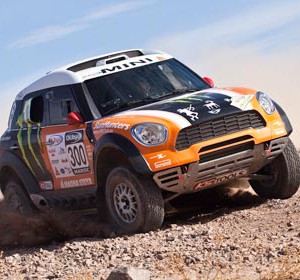 On Tuesday evening, following the second stage, Team X-raid around Team manager Sven Quandt opted for pulling out the MINI...
Copyright 2011-2016 Rallyraid.net - RISE Network. All Right Reserved.
Back to top