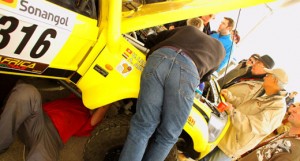 The weak winter sun shines over the southern French village of Saint-Cyprien and on a spit of land between the Mediterranean and the harbour the long tent is full of activity as cars ready for the annual race / rally/ adventure / expedition / experience of a life-time to Dakar go through scrutineering.

As you surely know the ‘Dakar’ doesn’t actually go to Dakar any more after the organisers deemed the African wastes too dangerous to host such a high profile event, and so South America now holds the race whose turbaned brand was forged in the Sahara. 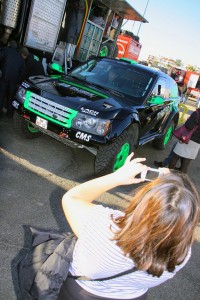 But those who know what magic there is in the African sands also know that the spirit of the event lies there… so when A.S.O chose another continent the ‘old guard’, past winners and organisers of those early and now legendary Paris-Dakars got together to keep the spirit alive… and the Africa Eco Race was born. Now in it’s 4th year this epic 13 day, 3500km event through 5 countries is fully matured and one of the names synonymous with those well-remembered days of yore, Rene Metge, has found and plotted routes for their beauty as well as their brutality, for their diversity as well as distance. The promise is that the Africa Eco Race will not be trying to recreate what went before, but will be an example of what the pinnacle of rally-raid should be.

Winner of all the previous editions, Jean-Louis Schlesser is a bit of a celebrity here, shaking hands with everyone with his family in tow and is very relaxed ahead of the start. A crowd was pressing around his buggy as it waited in line for scrutineering but the ‘Boss’ as he is affectionately known had time for me. “I’m happy to see all of the people here and I hope to have a strong and tough race… as there are a lot of good buggies to race against!” His buggy is all new though. Since the last race in the Pharaons Rally in Egypt the car has got longer, lighter, the engine sits lower, the radiator is in a different place… “Ah,” he shrugged when I asked if he was a bit worried about the lack of testing. “I think I know enough!”

Reigning truck class champion is the Czech Republic’s Tomas Tomecek who is so unassuming that I mistook him for one of his mechanics. “I like the Eco Race very much,” he smiled. “I was 9 years old when Thierry Sabine started the Dakar and I always liked the idea, but I watched how it changed with the money and commercialism… So now I choose the Africa Eco Race for that feeling of freedom… but maybe I am crazy…” 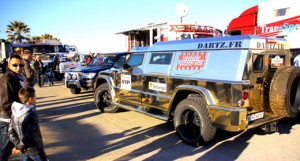 One of the most popular cars was the gold Dartz Kombat T-98, which I nicknamed GoldZilla, a 4-ton armoured car used in the upcoming Paramount Pictures film The Dictator. Driving it across the start line behind the cars with the whole crowd taking photos was a great experience!

42 cars took the start, with 5 trucks and 17 bikers… and the fun starts tomorrow with a 1000km route to the south of Spain… and a 3am start! 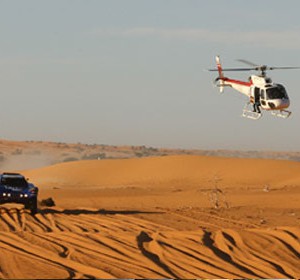