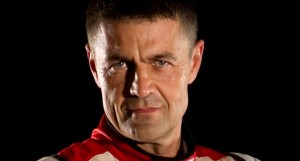 Arek Kwiecień / Terenowo.pl for Rallyraid.net: – Who will win The Dakar?

Krzysztof Hołowczyc: – The best one! The best competitor with a lot of luck. And luck favours better drivers – I hope it will favour me and Jean-Marc too… Several other factors influence the outcome too: being well prepared (I think most leading teams will be well prepared) and trustworthy gear. But first of all, we will have to avoid these „holes” that always lurk for us at some point.

Who will be your most difficult opponent?

Save for Carlos Sainz, all competitors who arrived at the finish line before me last year, will show up at the start: de Villers who came second, Nasser, the winner, Peterhansel who came fourth… Only Carlos is absent. So I expect tough battle. But let’s not fool ourselves: the Volkswagens are not here and even though the drivers changed them for quite good cars, they are not Race Touaregs that dominated last year.

And which car outside X-Raid Team do you think is the most dangerous?

Everybody are very curious about what Nasser will achieve in his car from Gordon! Gordon has a very fast car, but Nasser is a little „mad” and spoils a lot because of this „crazy” approach of his. There were cases when he would overtake me, flying past and disappear beyond the horizon, and then I would meet him on the route, his car crashed. But Robby, too, said that he would win this Dakar, that his time is coming… We will see how it ends. I can say myself that I would like to win and I must admit that my chances of joining the best drivers, the ones who play main roles in the rally are getting bigger. It seems the organizers also noticed how close we are to the leading teams, which is shown in our starting number. I believe we have a big chance as we have really good gear. I just need this handful of luck so that it will ride and not break down, and then it will be OK.

You are a member of X-Raid Team, but I remember that some time ago you were thinking about continuing your collaboration with Overdrive. You would now drive a petrol Hilux, praised by de Villers. Don’t you regret you choice?

It’s too early to talk about it, because Hilux hasn’t tasted real racing yet. I had a chance to test this car, I liked it a lot, but I’m not the type of guy who changes cars every five minutes. It takes at least half a year for such a project to develop before making any strategic decisions. Sure, one should never say never, all the time I’m thinking what is best for us, but today I’m a member of the X-Raid team and I will do everything to achieve the best possible result in this car.

After Volksvagen had resigned, it seemed that X-Raid was almost 100 percent sure to be the winner. But meanwhile a lot of private teams were created – all of them with high aspirations. Did Volkswagen’s decision turn out to be good for the Dakar, contrary to what may have seemed?

The gap that emerges is immediately filled. The Dakar is a big sport and big money… But – to be objective – our team has really big chances to win. I respect de Villers a lot – it’s an exceptional, fast competitor. If he sees that Toyota is competitive and reliable, and at the same time a chance to make a good result appears, he will surely not back down. He will be a tough opponent. Duncan Vos – the other Toyota driver – is also a fantastic, very experienced competitor. But it will be only his first appearance in the Dakar.

And what is your opinion about „Nissan Racing Lancer”, i.e. the rally car by Team Dessoude-Mitsubishi with an engine from Nissan?

Everybody knows that Lancer is fantastically easy to drive. Its advantage is its remarkable balance. Our engineer who now works for X-Raid, and took part in designing the Mitsubishi before, says that this car’s chassis and suspension are excellent. The only thing it was missing was engine – Mitsubishi failed in making a Diesel engine. A few modernised Lancers will start in the Dakar and surely whey won’t be easy opponents.

Can you please tell us what the rules are inside X-Raid team? On the one hand, you surely have to work together, but on the other hand you are immediate opponents. Do you have team orders?

So far we haven’t had such talks. I think we will be absolutely free. We have two drivers who will support us, but I assume we will help each other on the road as well. A lot will be clear after first stages – how fast we’re driving, who is competing for the win in the whole race. I can assure you there is no „life and death” rivalry between us. But we will race against each other of course. Not everything is simple in sport. 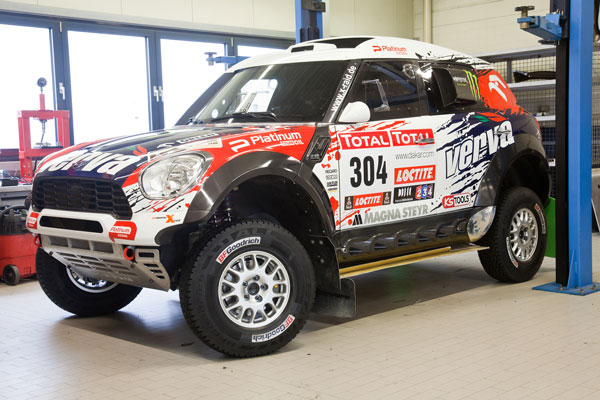 The Dakar 2012 will be your first rally in MINI. Have you had an occasion to test-drive it? What are your impressions?

I haven’t driven MINI too much. I completed a few day tests in Morocco – we had two MINIs and were riding them, the four of us. I covered hundreds kilometres, but this is not thousands. I also had my car’s shakedown – it was built as the last one, it’s car number eight. I must admit I like it a lot! Most of the parameters we had been talking about after the Dakar were changed. The car is more rally-like, it has better traction, its centre of gravity is set lower, even though the ground clearance stayed the same. A little better engine, a little nicer gear ratio, there’s more space in the cabin – a lot has been done. I like this car very much.

About the rally cars driven by you, Peterhansel and Roma: do they differ from each other in any way, or are they identical?

This is generally the same specification, some newer solutions are first applied to Stephane’s car – as he’s our number one. But there will be no big, decisive differences at The Dakar. Of course everyone tunes his car individually, for himself. I like softer, better-tractioned cars that absorb shock better and Stephane is fantastic on „fast” holes where you need a stiffer car. So the settings are sometimes different, but basic parameters of the engine, gearbox, transmission are very similar.

Is there anything you feel concerned about before this year edition of the rally? Unknown routes in Peru for example?

The thing I fear the most is a technical failure. All the rest is the same for all competitors. Sure, I don’t „feel” dunes so well, like Peterhansel or Roma. Still, [former] bikers have such feeling of lines, angles on sand… They are better on dunes, but I will try to equal them. I’m getting better and better at driving on sand too.

How are you planning to spend your last weeks before The Dakar? Have you got your own formula for „Direct Starting Preparation”?

The last distinctive moment of my preparations before The Dakar is a one-week trip to a tropical island where I run, but mainly prepare myself mentally. It’s very important. I have this interesting English test at the moment, which – if you answer honestly to a whole series of questions – makes you find your weak points. This helps me a lot in my preparations. Mental training is equally important – at least for me – as physical training. Because when we compete side by side, there are tiny differences between us, then even fractions of a second become important and what decides is the nuances which sometimes depend on ourselves.

Suppose that – and we wish you this a lot – you win The Dakar. What is next? Would you continue rallying? Fight for your next victories in The Dakar?

Please allow me to win The Dakar first! (laughter) And then I’ll think about it. I have some plans of course, I’d like to do a few more things in life, but so far I won’t tell you that „I want to fly to the moon”. I would like to win The Dakar very much and when I do, there will be other things to do. 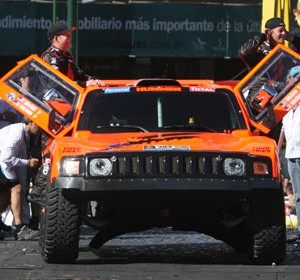 The make-up of the last teams to enrol on the Dakar held some major surprises in store, with the return of Johnny Campbell,...
Copyright 2011-2016 Rallyraid.net - RISE Network. All Right Reserved.
Back to top