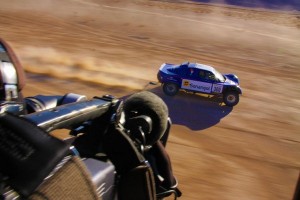 Yesterday evening I was worried about going in the helicopter, but perhaps I should have been more concerned about hypothermia… I noticed that it was hard to type the end of yesterday’s report, and that was because it was -4 degrees C! Suffice to say, sleeping outside, my summer sleeping bag didn’t really keep me warm!

The last (and only) time I was in a helicopter was at last year’s White Hills Baja in Southern Russia where the airforce training pilot took great pleasure in scaring a foreigner half to death… but today was absolutely fantastic! As soon as we took off I was breath-taken with the beauty of the landscape. Dark, jagged mountains reared out of the silty ground like the scales on the back of an immense dinosaur and the course was defined by the tiny lines of tracks that meandered seemingly to nowhere… 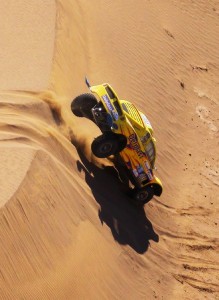 With 12 minutes on his shoulders from yesterday ‘The Boss’ Jean-Louis Schlesser seemed content to break his new co-driver Cyril Esquirol in gently today. Staying just behind Regis Delahaye’s dust trail he let the French driver do all the hard work opening the stage and sending up a giant rooster trail marking the way for Esquirol. Up until CP2 Delahaye had the lead but then at CP3 he had disappeared and Schlesser was on his own… about 20 minutes in front of anyone else.

For the first time I experienced what a full stage is truly like, how intense and extreme… and just purely epic it is. In rally-raid we are perhaps a bit used to long stages and when someone says, “375km,” it slips off the tongue quite easily… Recently I read an article about the WRC round in Argentina and how at 300 miles for then entire event it is one of the longest in rallying history (apart from the Safari Rally, I guess, although they didn’t mention it) but that’s what everyone in the Africa Eco Race has just done today… in one go… in the Sahara desert! It was 277km yesterday, 414km tomorrow… But as I hung out the side of the helicopter (sometimes looking backwards as our pilot thought nothing of doing 100mph sideways or backwards) I saw that every ten meters there is something that the driver needs to pay attention to. Every hole in the road, every rock, turn or potential short-cut… for four hours straight! 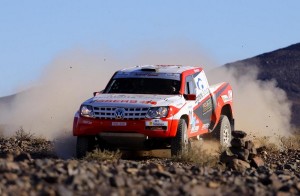 The reason that Regis Delahaye lost the lead was that his Russian co-driver  Konstantin Zhiltzov made a mistake that took them off-piste… and the detour off the track also cost them a puncture. By the time they’d fixed it the stage was sealed as Jacques Loomans in his Overdrive Amarok was in front and as soon as they closed up they had to back off because they were blinded by his dust trail. “We were close, but there was nothing we could do for an hour and a half as we were never close enough to use the Sentinal. (A device that tells the car in front to move over.) It’s a pity because the car is perfect.”

Loomens himself enjoyed the stage. “It was much faster than yesterday but not everything on the track is in the roadbook so we drove to be careful with the car. The scenery must surely be very beautiful, but there is no time to look at anything apart from straight ahead.” Under the skin of his nice looking Amarok is something far removed from anything VW have ever intended for their pick-up but Jacques said that he would prefer the standard engine over the aggressive race-prepared 4L V6 Nissan one he has now. “On the dunes you need to be smooth, no spinning the wheels, and you need control too…”

Redeeming himself for yesterday’s slightly unsteady start was Cyril Esquirol who guided Jean-Louis Schlesser to a commanding stage win that launches him to the top of the leaderboard, now 10 minutes clear of  Delahaye. “I am used to roadbooks from riding Enduro bikes, but sitting next to Jean-Louis is a completely new experience for me and that’s really just the problem… everything is different. But Jean-Louis is a really great driver, very clean… and also very fast!” 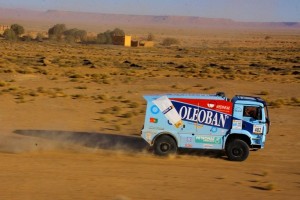 Taking another truck class win is the friendly Elisabete Jacinto, although she is far from confident of a good result on the rally. “I am pushing now, yes, but this is the only chance to make an impression because my truck is very heavy and so in the soft sand of Mauritania I always have some problems. I can let the air out of the tyres, but then they can get pulled off the rim… But the dunes are maybe a bit better than the stage yesterday as it was quite dangerous for trucks in some places… and the drops off the sides were huge!”

After winning the T1.2 class yesterday (production based vehicles) with 10th overall, Maxim Kirpilev and Vadim Shmaylov took it easy today. “Yesterday we broke the turbo, “Vadim explained. “So today we drove to save the car as the race hasn’t really started yet…” 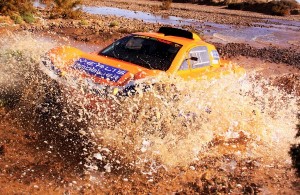 We set the helicopter down at a shallow river near the end of the stage and took a few shots of cars idling or powering through, and I have to thank Sergei Savenko for the free shower he gave me. He seemed to park in the middle of the river so I stepped forward to get a better shot… but then he floored it to get a run up the other bank… and the wave almost knocked me off my feet. I am glad to know that my camera seems to be waterproof… and the spinning blades of the helicopter dried my clothes in no time!

Tomorrow’s timed stage is a mammoth 414km… but that is only the 3rd longest stage of this epic event. Difficult dunes and dried lake beds are on the agenda… but it seems that I have been relegated to the minibus while someone else takes a turn in the helicopter. My concerns now though are finding a blanket so that I don’t freeze in the night… or a way of pulling up one of the rugs that cover the floor of the canteen to cover myself with… 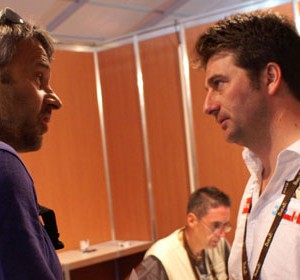 The relaxed atmosphere adopted by holiday-makers in “La Feliz” did not totally rub off on the riders and drivers of the Dakar...
Copyright 2011-2016 Rallyraid.net - RISE Network. All Right Reserved.
Back to top