San Rafael, Argentina, January 2, 2012: KTM’s two triple Dakar Rally winners Marc Coma and Cyril Despres got down to serious business in Stage Two of the 33rd edition of the world’s most challenging rally with Coma notching his first stage victory for 2012 ahead of factory teammate Despres to take the lead in the overall standings. 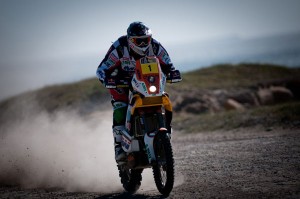 It was a day that tested both concentration and endurance, starting with a long and fast liaison over hard terrain as riders turned their machines towards the Sierra Nevadas. It then plunged them into the notoriously tricky dunes at El Nihuil and their challenging soft grey volcanic sand at the end of the day to complete the grueling 295 km of timed special. At the end of the day, KTM’s two top riders were separated by just one minute 18 seconds. Coma’s hard ride to take the stage also vaulted him ahead of Stage One winner Chaleco Lopez of Chile and he now has a 2 minute 30 advantage in the overall standings going into Stage Three.

Coma manages to overtake Lopez
Coma said the first part of the timed special had been very fast as he rode together with Lopez, a prelude to the difficult ride in the soft sand. Coma: “It was a lot more technical and with some navigation to do as well. I took the lead and kept riding at a good pace. I’m happy because I didn’t get lost. So, it’s been a good day for me!” 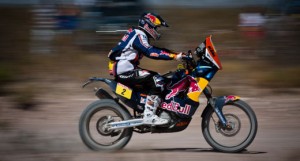 Despres finished thirteenth in the short 57 km timed special on the opening day, which he used as a warm up for what will be a testing 15-day journey to Lima. But on Stage Two he turned up the heat and advanced to the front of the field. Finishing second to Coma on Day Two was a confidence builder, Despres said, even if he had to eat a bit of dust while overtaking other riders in the opening part of the ride. He managed the difficult soft sand at the end of the special, which he said had not been easy but, like Coma, said it had been “a good day”. The Dakar 2012 is expected to be another face-off between these two riders who have each three Dakar titles to their names and have won on alternate years for the past six editions to create one of the great rivalries in today’s motorsports.

Solid day for the KTM “Water Carriers”
KTM’s two other factory riders, Joan Pedrero of Spain whose task it is to be the support rider for Marc Coma and Rubin Faria of Portugal who performs the same role for Cyril Despres finished the second stage in tenth and 15th place respectively and are ninth and thirteenth in the overall standings. Pedrero is 11:45 behind Coma in the overall standings and Faria trails the leader by 14:40. Also well placed are KTM riders Jakub Przgonski of Poland and evergreen Pal Anders Ullevalseter of Norway who occupy fourth and eighth place in the overalls.

KTM’s newcomers
KTM’s Dakar rookies, Johnny Aubert of the KTM Enduro Factory Team is in 20th overall after Stage two and Chris Birch of New Zealand who rides in extreme Enduro events for KTM is 31st.

Tomorrow demands a head for heights
Stage Three takes riders from San Rafael to San Juan and the ascent into the high altitude Andes, as they now ride due north parallel to the great mountain range. Concentration will be an issue with another testing day’s ride as they climb higher into the mountain region. Organizers have promised that this year’s route will be one of surprise challenges where difficult parts will come at unexpected times and endurance will be demanded throughout the rally. 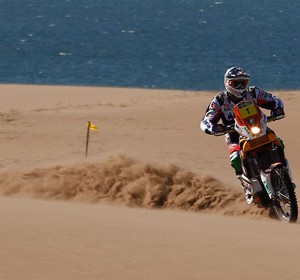 The Coma rocket has taken off. Second yesterday, the title holder has put some distance between himself and his main rivals...
Copyright 2011-2016 Rallyraid.net - RISE Network. All Right Reserved.
Back to top