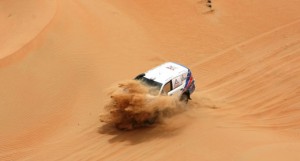 The Abu Dhabi Desert Challenge will return for its 22ndrunning in 2012, and will once again be held across the Emirate of Abu Dhabi from 30th March to 6th April. The world famous eventwill allow competitors to explore some of the wonders of the Western Region of Al Gharbia, and will go deep into the Liwa desert. But exploration is not the only thing that awaits competitors during this event; after all, it’s not called a ‘Challenge’ for nothing, and the event is guaranteed to push all participants to the limit.

The Abu Dhabi Desert Challenge is held under the patronage of H.H. Sheikh Hamdan Bin Zayed Al Nahyan, the Ruler’s Representative in the Western Region and organised by the Automobile and Touring Club of the United Arab Emirates (ATCUAE). The ATCUAE has now opened registration to competitors driving cars and trucks complying with FIA T1, T2, T3 and T4 technical regulations, and motorcyclists and quads running under the auspices of the FIM.

The 2012 Abu Dhabi Desert Challenge will be the opening round of the FIM Cross-Country Rallies World Championship, and Round 2 of the FIA World Cup for Cross Country Rallies. 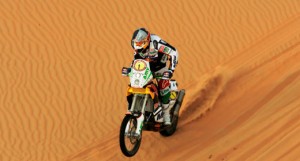 In the primary categories, last year’s car class was won by Desert Challenge legend StephanePeterhansel, a multiple winner of the event on both two and four wheels, and the motorcycle class was won by Spaniard Marc Coma. Both competitors are currently leading their respective categories in the 2012 Dakar Rally, and will be hoping to gain a strong result as preparation for a defence of their Desert Challenge titles. Alongside them last year, a field of over 170 competitors from 34 different countries battled to cover the 1500km of the route to reach the finish line in Abu Dhabi. The 2011 edition of the event also set a new milestone by being broadcasted on some of the world’s leading sports channels, to 121million homes, in 59 different countries, and across 20 different languages.

While most of the worlds most experienced top cross country rally drivers and riders are used to struggling with our desert, this year’s rally will test men and machines even harder by introducing competitors to the most spectacular, and toughest, dunes in the world. The high temperatures experienced by the UAE in April will also add an extra challenge to the 2012 Abu Dhabi Desert Challenge, contributing to making this event a very technical and demanding rally.

Mohammed Ben Sulayem, ATCUAE President and founder of the Abu Dhabi Desert Challenge, said: “The Desert Challenge is an iconic event in the UAE and both officials and competitors will be delighted to go back to Liwa to challenge and experience our beautiful desert once again. I’d like to express my gratitude to H.H. Sheikh Hamdan Bin Zayed Al Nahyan for always encouraging and supporting myself and the ATCUAE to present an outstanding and top class event every year. Over this new edition of the Abu Dhabi Desert Challenge we’ll deliver a more exciting, and challenging competition than ever before.” 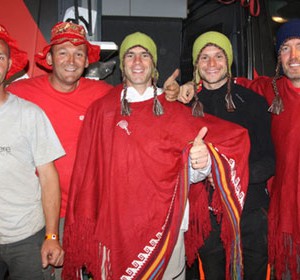 Nasca-Pisco, the last big special of the Dakar Rally, with lots of sand and dunes, was hard to complete for many riders and for Jes Munk...
Copyright 2011-2016 Rallyraid.net - RISE Network. All Right Reserved.
Back to top