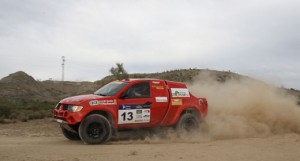 The debut of Josep Maria Servia and Fina Roman could not be better: the couple won the Baja Almanzora. On the other hand, word ’debut’ may sound strange in this case as both Servia and his wife have a long list of palmares already – separately. What made this April weekend special for them that this was the first time that they started together as driver and co-driver.

In the prologue Jose Zaragoza clocked the best time in front of Antonio Lopez. Francesc Termens was third with the Montero.

Sunday started near Albox with Zaragoza starting first. Actually he was also the first to finish, 22 minutes ahead of Servia but he couldn’t be happy about it as the reason was a navigational mistake. Finally the best time went to Servia with an advantage of 3’ 04” over Salvador Segura and 3’ 21” over Lopez. 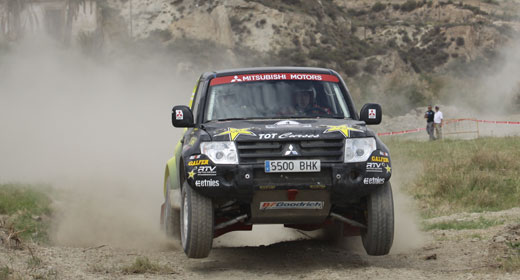 In the second special Termens was fastest but only 24 seconds in front of Servia that wasn’t enough to ‘dethrone’ the driver from Pals (Girona). Termens finally finished second while Luis Recuenco climbed on the last step of the podium behind the two Catalans.

The hardness of the rally took its toll: many drivers were forced to withdraw due to different problems. One of them was Rafa Ciscar who wanted to start at Baja Almanzora despite still recovering from a previous accident. He got the medical approval to be allowed to start but wasn’t able to finish due to a mechanical problem on his Isuzu D-Max.

Joan Roca had a special co-driver for this weekend: Marcos Robleda, winner of a contest sponsored by Michelin, but a failure of the transmission of the Toyota LandCruiser deprived the crew from finishing the rally. 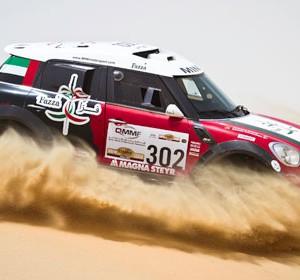 With their MINI ALL4 Racing, Khalifa Al Mutaiwei and his German navigator Andreas Schulz secured third position in Qatar’s...
Copyright 2011-2016 Rallyraid.net - RISE Network. All Right Reserved.
Back to top