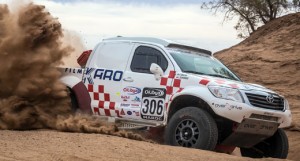 Three of the four Toyota Hiluxes entered by Overdrive Racing in the punishing 2012 OiLibya Rally of Morocco finished the six-day event in sixth, eighth and 12th positions after over 1,500 competitive kilometres through some of North Africa’s most demanding terrain.

Partnered by their respective co-drivers, Russian Anton Nikolaev, Aussie Jon Aston, and Frenchman Laurent Lichtleuchter, the three Toyota drivers suffered their fair share of problems during the event, which is seen by many as the final warm-up or shakedown test before the 2013 Dakar Rally.

“It was a mixed event for us, but all in all it was a positive result,” admitted Overdrive team principal Jean-Marc Fortin. “The crews did great jobs and the technical team worked well. It was unfortunate that Peter and Eddy (Chevallier) had to retire due to technical problems, but their pace was good up until then. We know what we need to do for the Dakar and the complete team us ready for that final push.”

Sixth-placed Ogorodnikov was pleased with his performance: “It was a really good rally for us,” said the Russian. “A big thanks to my mechanics who gave me a great car each day. I cannot be at the Dakar, but I am looking forward to the 2013 season.”

The Toyota quartet held seventh, 15th, 22nd and 27th overall after the opening 271km special stage around Erfoud last Monday. Ogorodnikov led the way in his Hilux with a time of 3hr 12min 20sec. Brazilan Guilerme Spinelli was the early leader in his Mitsubishi, but navigational problems and punctures had cost the Toyota quartet dearly and Van Merksteijn was also handed a one-hour penalty.

Leg two featured a 315km loop stage around Erfoud through the notorious Erg Chebbi and Ogorodnikov set the eighth fastest time to move up to a similar position in the overall rankings, despite a trio of punctures and delays in the sand. Olholm reached the end in 10th position, Ruta was delayed and finished 31st, but Van Merksteijn failed to finish the special after technical problems. Olholm and Ruta held 12th and 21st overall heading to the third 291km special stage between Erfoud and Zagora on Wednesday.

Van Merksteijn had been running sixth quickest through PC1 before hitting problems after PC2. The Dutchman incurred 11 hours of time penalties and slipped to 56th of the remaining 68 runners. Poland’s Krzysztof Holowczyc set the fastest time to take the outright lead from Eric Vigouroux by the margin of 1min 46sec.

“It was a disappointing time for us,” said Van Merksteijn. “The car has a lot of potential and, when we had clear runs, we had very competitive passage control times.” Van Merketeijn’s next step is a dune test in southern Africa with co-driver Chevallier to continue the team’s preparations for the 2013 Dakar.

The Dutchman was promoted to running 10th on the third stage, with Ogorodnikov, Olholm and Ruta placed in eighth, 11th and 33rd positions, as the route wound its way to Zagora.

Vigouroux was quickest on the third stage with a time of 2hr 39min 13sec and the Overdrive Racing quartet of Toyotas reached the stage finish in seventh, 16th, 23rd and 41st overall. Ruta had the best performance of the day and climbed from his start position of 33rd to set the seventh quickest time. The Toyota quartet held ninth, 10th, 16th and 45th in the overall rankings.

A gruelling stage through the Chegaga looped around the Zagora bivouac and was used for stage four; Holowczyc set the quickest time and closed on Vigouroux in the general classification. Ogorodnikov recorded the sixth quickest time and Ruta and Olholm were 10th and 11th.

The penultimate stage ran from Oued Draa to the Iriki Lake and back to Zagora and Ogorodnikov recorded his best performance of the rally with the third quickest time on a special where second-placed Holowczyc hit trouble and Olholm, Ruta and Van Merksteijn set the 10th, 12th and 44th fastest times. Vigouroux found himself ahead of Russian Leonid Noviskiy by over 42 minutes in the general classification.

The final 171km special stage crossed the Jebel Rhart and the quartet of Toyotas began the special from seventh, eighth, 12th and 54th in the overall standings. Ogorodnikov led the way home in fifth position, with Ruta claiming ninth and Olholm slotting into 12th.

“My first cross-country rally was definitely a learning experience,” said Ruta. “Laurent and I worked well and our pace on the gravel sections was good. But we still need to work on the dunes. The team was great and they kept the car running perfectly. Thanks to Orlen and Polesat, my sponsors, for their support.” 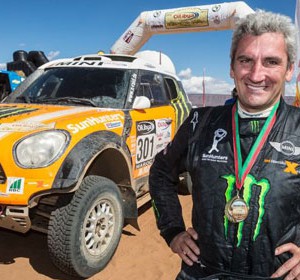 After six days of the most interesting African race in Morocco, Russian “duo Leonid Novitskiy/Oleg Tyupenkin (Mini All4...
Copyright 2011-2016 Rallyraid.net - RISE Network. All Right Reserved.
Back to top