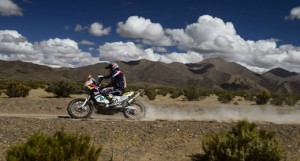 The 7th stage of the Dakar, in mourning following the death of rider Thomas Bourgin (see the special press release), was won by American Kurt Caselli in the bike category. Cyril Despres lost ground on Olivier Pain, who still leads, on the crossing of the Andes Mountain range. In the car race, Stéphane Peterhansel slightly consolidated his advantage over Nasser Al Attiyah by winning his 61st stage victory on the Dakar.

Kurt Caselli arrived on the Dakar with a reputation as an all-terrain expert. It was in the mountains, on a special stage that took place above an altitude of 3,300 metres, where the American picked up his first victory on the Dakar. The very quick terrain of this seventh stage was ideal for the KTM rider, who is used to shining on the American circuit, having recently finished the major event of his year, the Baja 1000, in second place. After having crossed the Andes Mountains, Caselli, who inherited Marc Coma’s bike in Lima, gobbled up the 218 kilometres of the timed section at an average speed of 117 kmph. On the finishing line, by winning the special stage, he became the first newcomer to win a stage since Ruben Faria in 2006, in his native Portugal.

Caselli’s pace gave him a lead of 1’23” over Francisco Lopez and Olivier Pain, the two other riders who will have ended the day with a smile on their faces. “Chaleco” climbs two places up the general standings to take on the role of Olivier Pain’s main pursuer, 6’06” behind the young Frenchman. The provisional podium is therefore no longer 100 % French. Whilst David Casteu is still on the third step, Cyril Despres dropped from the podium and now finds himself in 5th place. The title holder, who experienced gearbox problems today, had to cover almost all the distance without being able to change into 5th gear. He now trails Olivier Pain by 14’07”.

In the quad race, after having lost out on victory to Ignacio Casale, yesterday’s Chilean special stage winner, Marcos Patronelli again saw a new stage winner take victory from him, in the form of Sebastian Palma, who was able to draw on the full power of his Can-Am. Although he finished 34” behind his countryman, Patronelli is still on top of the general standings with a comfortable lead: 1 hour and 14 minutes over Casale, and 1 hour 50 minutes over Sonik. 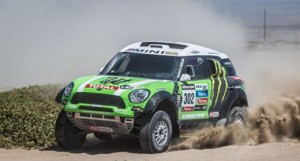 The profile of this mountain stage asked especially difficult questions of the car category, bearing in mind that engines equipped with turbos suffer significant loss of power at altitude. This supposed handicap did not stop the Mini driven by Stéphane Peterhansel producing the best time at the special stage finish. Though the French driver has probably lost count of his stage victories, for the record this was his 61st. However, he will be fully aware of the distance protecting him from the threat posed by Nasser Al Attiyah, which rose to 3’14” by the end of the day.

Speaking of gaps, Guerlain Chicherit seems to be subscribed to low figures that do not turn in his favour. In Arequipa, he missed out on victory, which went to Nasser Al Attiyah, by just 36 seconds. Today, he lowered that figure to 34”, but lost out once again in his quest for victory. The SMG driver, who led at half of the intermediate time check points today indeed missed out on triumph, but provided some encouraging signs after having injured his wrist on stage five. Sixth in the general standings, ahead of his SMG team-mates, Ronand Chabot and Benat Errandonea, Chicherit seems to be back in business.

Gerard de Rooy’s statistics are much more flattering, because his win ratio on arriving in Argentina is 5 out of a possible 7. The only problem he has encountered lost him at least half an hour, but the title holder still holds a lead of more than 22′ over Eduard Nikolaev, and 41’25” over the Tatra driven by Martin Kolomny. However, the Iveco clan were not all smiles today, because after spectacularly rolling his vehicle yesterday, Hans Stacey, who managed to get his truck to the finishing line yesterday, did not take starter’s orders today.

Motorcycle rider no. 106 Thomas Bourgin (FRA) was the victim of a fatal traffic accident on the link route as he made his way to the start...
Copyright 2011-2016 Rallyraid.net - RISE Network. All Right Reserved.
Back to top