Despres and Peter, the Lima-Santiago connection

124 motorcycle riders, 26 quad drivers, 89 car crews and 60 car crews paraded on the podium set up opposite Santiago’s Palacio de la Moneda to celebrate their arrival in the Chilean capital, as the President of the Republic emerged from the palace to congratulate the winners of the 2013 Dakar. With 14% days of racing and over 8,000 kilometres under their belts, 67% (299/449) of the vehicles on the start list in Lima made it to the finish. In the main, it was the defending champions who survived all the unexpected turns of events to dominate the race, with Cyril Despres making it five in the motorcycle category and Stéphane Peterhansel taking his fifth victory in a car after being crowned in Lima last year. Marcos Patronelli won for the second time in the quad category, on the back of his brother Alejandro’s triumph last year. Only one of the champions is a first-time winner: Eduard Nikolaev, who took the truck title.

The favourite lived up to the expectations. Cyril Despres took his fifth Dakar win in what was his 12th start, writing another glorious page in the history of the sport and catching up with Cyril Neveu in the palmarès of his category. The Frenchman is now one step away from equalling the record for the most victories on a motorcycle, held by none other than Stéphane Peterhansel. But his triumph in the 2013 edition also taught him a lot about the difficulty of the future challenges awaiting him. His victory was based on the traditional ingredients: a strong physical and technical performance, good navigational skills and a feeling for the race. But it also drew upon a series of circumstances, not coincidences, which he couldn’t have possibly foreseen. The defending champion was on the defensive throughout the first week, with the Yamahas in the limelight. His chances seemed to be in danger halfway throughout the marathon stage, raced over two days with a pause in an isolated bivouac in Cachi, which he reached in 5th place overall, a failing engine and the prospect of a 15-minute penalty for swapping engines with Pole Marek Dabrowski.

Cyril Despres kept his cool and rose to the challenge from the very next day, when he avoided making the same navigational blunder as his main rivals. He swept away the competition in the stage to Córdoba, the longest one of this year’s rally, where he benefitted from Casteu’s withdrawal and Olivier Pain’s little mistakes. The road to Santiago was clear and he now focused on helping his lieutenant and friend Ruben Faria onto the second step of the podium. Mission accomplished, once again after a few twists and turns, as KTM’s Portuguese rider made the most of the mishaps plaguing Francisco López, who had to change his engine and give up his second place overall on the day before the finish due to the ensuing penalty.

The Yamahas showed they were capable of taking the fight to the KTMs, provided that they’re able to polish the individual mistakes made by the two aforementioned ephemeral leaders of the general classification, but at the end of the day it was Chaleco who posed the greatest threat to the Despres-Faria duo. President Piñera’s favourite was never in the overall lead, but he grabbed five stages, including bookend wins, and finished 3rd, a mere 18′48″ behind the champion. It was the closest Dakar podium since 2005, when Despres took his maiden win ahead of Marc Coma and Alfie Cox. And this despite getting a 15-minute penalty on the last day.

Chaleco had to control his hot temper in order to step on the podium of the Dakar for the second time in his career. A few of Despres’ future rivals will have to do the same thing, such as Spain’s Joan Barreda, who won four stages but only managed to finish 17th overall. American Kurt Caselli, a teammate of the defending champion at KTM, seems to be a fast learner after taking two stages in his first participation. Nevertheless, the best rookie trophy goes to South Africa’s Riaan Van Niekerk, who finished 13th overall. Among the riders without assistance, Hugo Payen not only drove the naked girl on his number 69 motorcycle all the way Santiago without getting her too dirty, but he also did it with the best time in his category, 49th overall. Nevertheless, Laia Sanz was the only female rider to make it to the finish, in 93rd place. A special mention for Luis Belaustegui, who closes the motorcycle category but managed to complete the Dakar in this third attempt on a 150 cc KTM, after spending 60 hours more than Despres on the course. Hats off!

The field was stronger and more competitive than ever before in the short history of this category. With twelve nationalities on the start line, Marcos Patronelli‘s victory was nothing to sneeze at. The Argentinean followed in the footsteps of his older brother Alejandro (winner in 2011 and 2012, but absent from this edition) and took another win to go along with his triumph in 2010. The Patronellis extended their iron rule (with the younger brother winning four stages and taking the rally with 1 h 35′ to spare on runner-up Ignacio Casale, and 3 h 18′ on third-placed Rafał Sonik), but the 35th edition also saw the rise of new players who proved their mettle from their Dakar debut. Among them, South African Van Biljon, Sebastian Husseini and Aussie Pal Smith, all of them stage winners, as well as Peruvian Ignacio Flores and Chileans Casale and Palma. A clear signal of the rise of new credible and unabashed competitors ready to challenge the Argentinean brothers. Could next year be a watershed moment?

Cars: the buggies fight back but Peter prevails

Anyone taking a cursory look at the classification may think the 35th edition of the Dakar was a walk in the park for Stéphane Peterhansel, the unassailable overall leader from the 2nd stage and winner of an 11th Dakar counting all categories, a new record. But his 5th win in a car, which he took with a 42′22″ margin over Giniel de Villiers and 1 h 28′ over teammate Leonid Novitskiy, had more to do with the bad luck of his rivals than with the Mini’s supremacy on the course. Peter won two stages, but he spent the first week fighting off the onslaughts of Nasser Al-Attiyah’s buggy, and it was thanks to the Qatari’s withdrawal in stage 9 that he was able to spend the second week managing his comfortable buffer over the South African, who’d made a costly navigational mistake in stage 3.

With a little push from the rule book, the two-wheel drive cars lit the fireworks in the 2013 Dakar and were rewarded with seven stage wins (three for Al-Attiyah, two for Robby Gordon and one each for Carlos Sainz and Guerlain Chicherit). Even though four-wheel drive cars, including three Minis and the Chinese Great Wall of the ever-consistent Portuguese driver Carlos Sousa (6th), took the top six places, this is to a great extent thanks to the reliability issues experienced by the buggies, which were clearly faster on the course. The last time there were three buggies in the final Top 10 was in 2000. Ronan Chabot’s seventh place in Santiago is also the best overall performance by a two-wheel drive car since Robby Gordon finished third in 2009. Good enough for the Frenchman to defend his title in this category by 9′39″ on teammate Guerlain Chicherit.

The best rookie was Russian Vladimir Vasilyev, who finished 16th overall with his G-Force prototype, 11 places higher than the Toyota Land Cruiser driven by Spaniard Xavier Foj, who won his 2nd straight title in the Production category by 13′09″ on Frenchman Nicolas Gibon. Finally, Dutchman Tim Coronel won the “solo” race again by finishing 55th overall, while Colombia’s Martha Mariño was the only woman in the final classification, where she placed 86th.

Trucks: The Kamazs strike back

The 2013 edition saw the comeback of the Kamazs, which took their 11th win and, most importantly, pulled off a stunning 1-2-3 in Santiago with Russians Eduard Nikolaev, Ayrat Mardeev and Andrey Karginov! A nice gift for Vladimir Chagin in his first year as team manager. But the race wasn’t dyed in the same deep blue hue as it was during the Tsar’s reign. Champion Nikolaev was the first truck driver in the history of the rally to win the race without taking any stages and, all in all, the Russian juggernauts only won four, with defending champion Gerard de Rooy taking six. There’s no doubt he was the fastest man on the course, but a broken turbo in the 9th stage put paid to his hopes. He lost an hour and was unable to claw it back, finishing in fourth place, 4′19″ from the podium and just ahead of the two ageing Tatras driven by Martin Kolomý and especially Aleš Loprais, his only rival in the early stages and ephemeral leader after stage 4, before a failing battery dashed his dreams of fighting for the top honours the very next day. 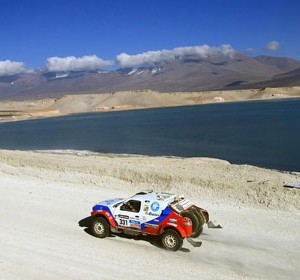 Just one more stage to go… It’s easy to say, but this is the Dakar where dangers wait every inch of the way to catch...
Copyright 2011-2016 Rallyraid.net - RISE Network. All Right Reserved.
Back to top