Just one more stage to go… It’s easy to say, but this is the Dakar where dangers wait every inch of the way to catch crews out, and in the South American mountains Lady Luck is a fickle woman. 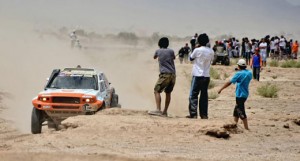 At 128km, apart from the first day’s prologue, the last stage was the shortest of the whole event. After two weeks of racing it should have been a formality. But no, it almost ended in disaster for Vladimir Vasiliev. The stage was split into two timed sections and near the end of the first something in Vasiliev’s gearbox broke. And with the end almost in sight… There was no time for the chase crews to be able to do anything but fortunately Lady Luck came with the bright orange Mitsubishi of Vadim Nesterchuk. The Ukrainian hero towed the stricken G-Force out of the stage, through the neutral section and into the second part of the stage, where team mate Boris Gadasin was waiting. But this wasn’t the end of the journey, no, it was the beginning!

Every time they got going a truck would appear in the mirrors and getting caught up in KAMAZ’s stunning 1-2-3 finish would not be the best thing to do so they pulled over and waited for the dust to settle before continuing on… but if it was hard enough going for Gadasin up ahead, it was worse for Vasiliev as he could see absolutely nothing in the dust, not even the back of the other G-Force. “He just disappeared in the cloud even though I was trying to see. Sometimes I saw something come past at the side and tried to get out of the way… but then there was a rock, bang! Then a tree, bang! I don’t think I have ever done anything so extreme in my life!”

Gadasin said, “I just kept expecting that we’d get back with a snapped rope and Vladimir would be wedged between to trees or something!” 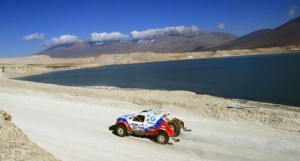 But ask anyone outside the Top 5 who hasn’t been doing this for years and doesn’t have a massive team behind them and they will all tell you that the Dakar is all about overcoming adversity and getting to the end no matter what and that is what the rookie Russian team had to do. Only 10% of first-timers finish the world’s toughest motorsport event and with the help of a tow-rope at the very end both the G-Force Protos made it all the way from Lima in Peru to Santiago in Chile, 4155 competitive kilometres over 14 days.

Vladimir Vasiliev and Vitaly Evtehov finished in an impressive 16th place while today’s escapades dropped Boris Gadasin and Alexei Kuzmich just out of the Top 20, into 21st. Still, they did better than 90% of other first-timers. The odds were beaten! Mission accomplished! The team can now return from the deserts of South America to the snows of Russia with pride… and get ready for the next event in three weeks time, the Northern Forest Baja…

Despres and Peter, the Lima-Santiago connection 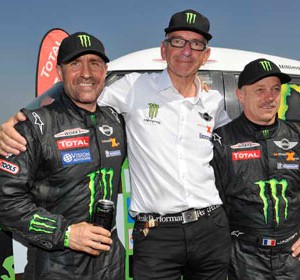 Reliability, consistency and perfection: features that don’t sound spectacular – but represented the basis for a spectacular...
Copyright 2011-2016 Rallyraid.net - RISE Network. All Right Reserved.
Back to top