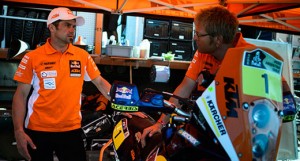 The penultimate stage of the 2013 Dakar went to a hard charging Chaleco Lopez ahead of Red Bull KTM rider Cyril Despres with Paulo Goncalves third. Overall Chaleco’s win puts him up to second place 08’15 behind Cyril, while Cyril’s team mate Ruben Faria is now in third at 14’41.

Cyril Despres: “It was a good stage today with some tricky navigation on parts of the first special. There were a lot of spectators out there who’d made some tracks and that made it even more complicated. Definitely not a day to push too hard…
Of course this evening everybody is asking me if I think I have won the race, but I have too much respect for the Dakar to declare myself the winner with one stage still left to go. On this race anything can happen, that is one of the reasons it is so special, and also the reason I will be staying very concentrated all the way to the final finish line.” 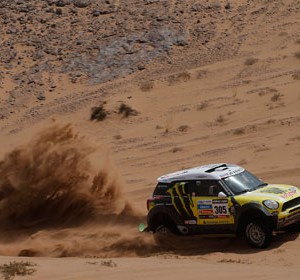 Every racing driver wants to win but there are moments when the team enjoys the top priority. A fact Nani Roma also is aware...
Copyright 2011-2016 Rallyraid.net - RISE Network. All Right Reserved.
Back to top