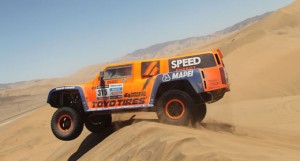 After dominating the stage and then battling near the last way-point  Robby Gordon and navigator Kellon Walch captured the Stage 13 win. This is the second stage win and ninth podium of 2013 for the American duo.

“We had another great Special today. We are really happy to be on top and need to talk about how great our Toyo Tires have been. A few days ago, we had a loose line that made the tire soft which was not the tire’s fault, so that makes 13 stages without any issues or flats. Toyo Tires makes a great tire and that helped us capture the win today,” commented Robby Gordon after winning his second stage of the 2013 Dakar Rally.

Tomorrow is the conclusion of the Dakar Rally sending the competitors south to Santiago. The Special is relatively short with only 128KM total to close out the 2013 edition. Robby Gordon looks to capture another stage victory for the SPEED Energy / Toyo Tires / MAPEI HUMMER as he will be the first car on the road to start the final stage. 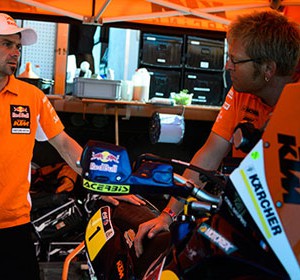 The penultimate stage of the 2013 Dakar went to a hard charging Chaleco Lopez ahead of Red Bull KTM rider Cyril Despres with...
Copyright 2011-2016 Rallyraid.net - RISE Network. All Right Reserved.
Back to top