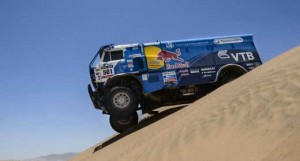 Flight in the journalistic plane to a place of the following bivouac, perhaps, is the only opportunity during Dakar to get off from racing vanity and to get thoughts together. The plane set a course for La Serena and flies along mountains to the south. Majestic mountain range. The Andes border South America from the North to the South for 9000 kilometers! The Andes are the most important climatic barrier in South America isolating territories to the West from Main Cordilleras from the influence of the Atlantic Ocean, to the East — from the influence of the Pacific Ocean. Average width of a mountain chain is about 300 kilometers. Rally competitors who crossed yesterday the Andes through the pass of San Francisco at Fiambala– Copiapo stage could personally convince of it. We wangled for a long road to the Anatoly Tanin’s Assistance car, but we didn’t regret about it at all. Neither the altitude sickness, nor sharp serpentines could keep us from the temptation to look with our own eyes at the Mountain Lake about which competitors of Dakar-2009 told us. When reached it, we gaze on volcanoes like entranced, with snow caps and the blue sky, which is reflected in the water.

Our plane plunges into a dense veil of clouds and leads for landing in La Serena’s airport. The dense fog from the ocean which local residents call Camanchaca, begins to dissipate, and the race organizers can already give start to the penultimate stage of the Dakar Rally.

The start for jeeps was mixed today, Andrey Karginov who was the first yesterday among competitors of trucks category and the twelfth in the overall starts at 12.35 local time. The special stage is divided into two parts by a neutralization zone. From the first half of a route, reports about control points’ passage time were sent in real time to the press center. There was a real fight between Andrey Karginov and Gerard De Rooy for the third place in the overall classification. Time difference of control points passing – seconds. But this is trucks, not Formula-1! It is clear that the ambitious Dutch went for broke. Already yesterday in the heat of the fight he cut a wheel, lost time on wheel changing, but as you can see today he is not going to calm down. We received SMS from Anton Elikov working on the route: “Ayrat dug, Edik pulled him out “. It is very undesirable loss of time. Rivals are too close to Russians. Up to the finish moment the stage keeps all funs on tenterhooks. As a result, Andrey Karginov’s efforts not to concede to the De Rooy and his great desire to win back the time lost at the first stages were rewarded. He won the third stage at Dakar this year and the fifth stage in his career. He won from Gerard De Rooy almost three minutes. Moreover, he is now ahead of Ayrat Mardeev in general classification, moving on the second place. Ayrat’s annoying stop in dunes approached De Rooy to him on a dangerous distance – only 4 minutes 41 seconds. Knowing the Dutch, it is necessary to understand that tomorrow at the last stage he will do everything possible to catch up with Ayrat Mardeev, and maybe Andrey Karginov. 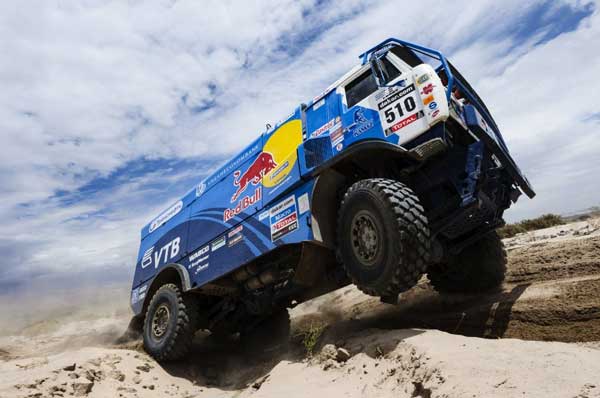 “It suffers, but drives!”- Right after the finish Andrey Karginov says with love about his car. “Today we took in stride hillocks with double danger signs, De Rooy did the same.”

On a question “What for you was today the most difficult?” Eduard Nikolaev answers: “The most difficult was to see Ayrat’s eyes when he got stuck, and we pulled him out. He lost time, and all of us friendly worried about him.”

Let’s wish that Ayrat Mardeev’s crew will be luckier tomorrow, than today. Let’s hope that tomorrow’s day will bring only pleasant surprises. Despite an onslaught of rivals and marathon difficulties “The blue armada” suffers and drives! 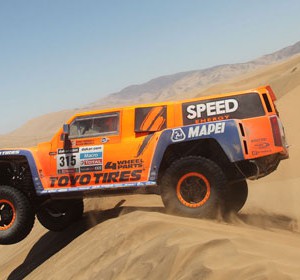 After dominating the stage and then battling near the last way-point  Robby Gordon and navigator Kellon Walch captured the Stage...
Copyright 2011-2016 Rallyraid.net - RISE Network. All Right Reserved.
Back to top