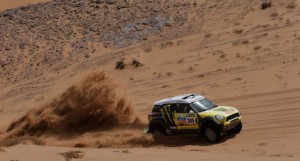 Every racing driver wants to win but there are moments when the team enjoys the top priority. A fact Nani Roma also is aware of and therefore, he and his French navigator Michel Périn opted for deliberately dropping behind Stéphane Peterhansel, in the 13th stage, from Copiapo to La Serena. So, the overall leader would have had the chance of relying on fast and professional help if it had been necessary.

The French leader once again opted for a conservative approach to avoid any unnecessary risk. Together with his compatriot and co-driver Jean-Paul Cottret, he finished ninth and nonetheless, he still holds a 44:38-minute lead. “Today we focused on safety and therefore, we lost several minutes of our lead,” revealed Peterhansel. “But that’s okay.” Due to the support for their team-mate, Roma (ESP) and Michel Périn (FRA) had to settle for finishing 11th, today. “Well, that’s a part of the game,” said Roma. “If you are contesting the Dakar as a part of a team you know that you could have to cope with a situation like that. It goes without saying that this isn’t exactly what I would call a nice situation for me – but it’s important that Stéphane will win the Dakar, tomorrow.” 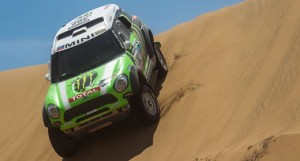 At the same time, the Argentinean / Portuguese pairing Orlando Terranova / Paulo Fiúza has established as constant among the front-runners. Today, their BMW X3 CC was the fastest four-wheel driven car of the entire field. Terranova finished third and consequently, he was solely defeated by the buggies of Robby Gordon and Guerlain Chicherit. “Altogether, today’s special stage was really nice,” said Terranova, “But the second part was extremely bumpy and rocky. There, the buggies with their bigger spring travel enjoyed a clear advantage. But I’m happy with our performance.”

The two Russians Leonid Novitskiy and Konstantin Zhiltsov finished fifth, with their orange MINI ALL4 Racing. “We pushed hard today – but not without using our wits,” Zhiltsov said with a smile. Boris Garafulic (CHI) and Gilles Picard (FRA) also delivered in great style, today. They took their MINI ALL4 Racing to 13th position. With their time, they worked their way up to 10thj position in the overall rankings.

“I know that dropping back deliberately was a matter of course for Nani – but anything but easy at the same time,” said Monster Energy Team Manager Sven Quandt. “But today, the overall win had to be our top priority.”

Tomorrow, the Monster Energy X-raid Team will have to tremble for the last time. The 14th and final stage will take the field from La Serena to the finish in Santiago de Chile. The total special-stage distance amounts to 346 kilometres. The first 111 kilometres will be followed by a neutralisation phase that will end with just five more kilometres to go to the special stage’s finish line at Limache. These final kilometres will be held as show lap for the spectators. Afterwards, the competitors will have to cover another 158 kilometres to the Parc Fermé in Santiago. Only there, the fear of making a mistake that could cost the team the 2013 Dakar win will be finally over! 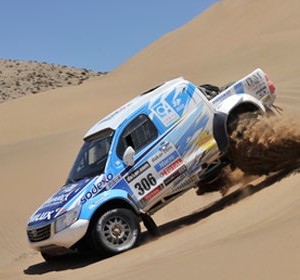 The Dakar is almost over, but nothing is finished until the checkered flag comes down. For Lucio´s contentment, the terrains...
Copyright 2011-2016 Rallyraid.net - RISE Network. All Right Reserved.
Back to top