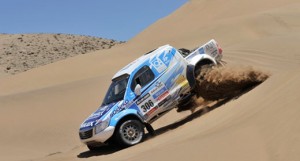 The Dakar is almost over, but nothing is finished until the checkered flag comes down. For Lucio´s contentment, the terrains were still sandy today at the beginning of the stage, the last dunes before the track opened into sandy routes.

The first cars left the bivouac in Copiapo around 10:15 this morning, always leaving a timeframe for the “camanchaca”, the always uninvited fog caused by the proximity of the Atacama Desert to the Pacific Ocean… which goes away as the sun comes up.

Started sixth this morning, the guys from Mendoza decided to take back time from their rivals and get further up in the classification, the main goal was to get into the top ten. In this second week, Lucio Alvarez and Ronnie Graue climbed up more than 1h30m, and in La Serena, they made it to the 12th position, only 3 minutes away from the 10th place kept by the Chilean driver, Boris Garafulic. Nothing has been written yet!

“We drove in a good way; I am very pleased with the pace we were able to maintain through the entire special stage, tells Lucio at the finish line of the special, 200 km before the bivouac. Navigation was delicate at some places and Ronnie made a great interpretation of the road book.

At the start, we had lots of fuel, the stage was long. In the first part of it, I could not attack how I wanted because the car was too heavy, but as we miles went by, we made it in a very good rhythm. Then, again, I really had fun in the dunes in the first sandy part of the special, which was also fast, and fun.”

Tomorrow, the competitors of the Dakar´s 35th edition will arrive to Santiago. But before that, they must complete a 626 km journey of which 346 will be timed. The Dakar is not over. 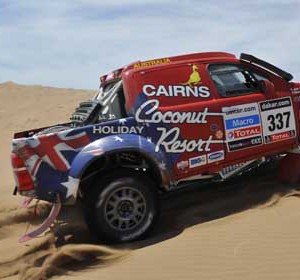 Toyota Imperial South Africa’s Giniel de Villiers moved to within one stage of a sensational second place finish in the 2013...
Copyright 2011-2016 Rallyraid.net - RISE Network. All Right Reserved.
Back to top