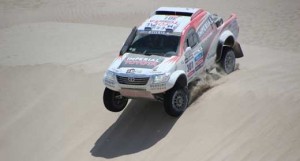 Toyota Imperial South Africa’s Giniel de Villiers moved to within one stage of a sensational second place finish in the 2013 Dakar Rally after setting the fourth quickest time on the penultimate 441km special stage between Copiapó and La Serena in Chile on Friday.

Partnered by his German co-driver Dirk von Zitzewitz, the South African – winner of the event in 2009 – looks set to improve on the impressive third place he achieved with the Toyota team in 2012. It could mark his fourth podium finish in five years.  “It’s proved tough again,” said Giniel. “In the dunes we were twice forced to take double runs in order to cross them, otherwise it was okay. Today’s stage was certainly not one on which to attack. One day to go and we certainly want to retain second place.”

Overdrive Racing is also closing in on a superb conclusion to this year’s Dakar Rally with four Toyota Hiluxes inside the top 16. The four Belgian-run cars hold 11th, 12th, 15th and 16th overall.

Only 93 cars set off along Route 5 on the 90km liaison to the start of the penultimate 441km special stage of the race through the last dunes of the rally to a finish north of La Serena. The ASO decided to start the special later than originally planned to avoid problems caused by the notoriously dense fog banks or ‘Camanchacas’ that affects the Pacific coastal area in the mornings. 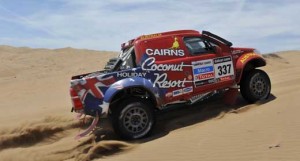 The special featured a series of tricky dune crossings, a substantial distance along twisty trails at altitude and a short non-competitive tarmac section after 245km. Previous stage winner Joan Roma led teams into action but Orlando Terranova, Robbie Gordon and De Villiers made the early running through 69km.

Gordon eventually won the stage in a time of 3hrs 40min 53sec, but Peterhansel retained a comfortable lead of 44min 38sec over De Villiers. The Argentinean duo of Lucio Alvarez and Ronnie Graue set the sixth quickest time for the second successive day and moved up to 12th overall in the results.

Geoff Olholm and British co-driver Jonathon Aston set about defending their top 10 position through the penultimate stage in the Cairns Coconut Resort-supported Toyota Hilux. They lost time and recorded the 17th time on the day and, as a result, lost a place in the overall standings and slipped to 11th. 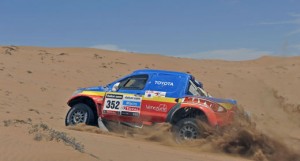 The Venezuelan pairing of Nunzio Coffaro and Daniel Meneses started the day in 15th overall in the Team Azimut Toyota, but they were watchful of the presence of Gordon in their rear-view mirror in terms of the overall rankings. Gordon’s stage win duly demoted the South Americans to 16th place.

Former ski jump champion Adam Malysz and co-driver Rafal Marton began the day in 14th and slipped to 15th after being passed by Gordon.

Tomorrow (Saturday) is the final stage of the Dakar Rally, as teams leave La Serena and head south towards the Chilean capital of Santiago for the official podium celebrations in front of the Palacio de La Moneda on the Plaza de la Constitución on Sunday.

A 121km link takes competitors south along Chile’s Route 5 to the start of the first part of a 128km special that is split by a substantial neutralisation section. A short final competitive part of the day’s route guides crews into the suburbs of Santiago for the final flying finish boards of the 35th Dakar Rally. 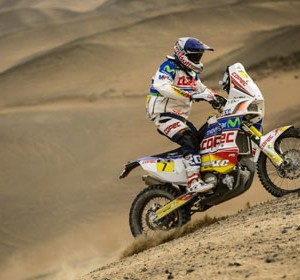 The day before the finish in Santiago, "Chaleco" Lopez put in a first-class performance between Copiapo and La Serena to pick...
Copyright 2011-2016 Rallyraid.net - RISE Network. All Right Reserved.
Back to top