Elisabete Jacinto remains firmly in the first position of the 23rd Rallye Aïcha des Gazelles. At a time when there are only three days left to compete, the Portuguese driver leads the standings auto / truck with 64.98 points, the lowest score among the 150 teams of all categories.

The team formed by Elisabete Jacinto and Valérie Dot, in the forth stage, was the second best with a penalty of only 20,44 kilometers. The french Carole Montillet and Julie Verdaguet, who won the last two editions of the rally, were the best of the marathon day. The dispute between these teams has been great with both of them fighting for the first place. However, the leadership has belonged, since the beginning of the race, to the Portuguese driver.

Elisabete Jacinto, who is competing in the fifth stage of the rally, is satisfied with her performance: “we are living a great adventure. We had to dig in the sand, we surpassed sharp rocks and we did a lot of trial just to do a perfect straight line. No doubt, it’s been a tough rally. But I think we are on track and so far we have been a quite efficient team and very regular. Valérie is making a great job” said Elisabete Jacinto.

The sixth and final stage of this competition is, once again, a two-day marathon journey. It will be the last effort that the participants will have to make to reach the end. The last kilometers of the race will be held in the sands of Erg Cheggaga. 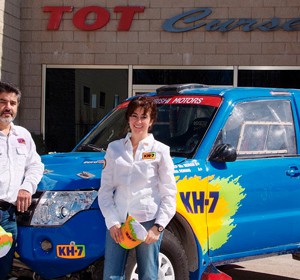 Spanish Cross Country Rally season is to start in Almeria with the Baja Almanzora on 6 April. This race will be the first...
Copyright 2011-2016 Rallyraid.net - RISE Network. All Right Reserved.
Back to top