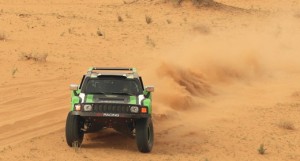 Present in Saudi Arabia at the request of the MY Racing team, Robby Gordon did not hold back when it came to advising Yazeed Al-Rajhi, who will be competing in several rally-raids this year at the wheel of one of the MY Racing team Hummer cars. The American is also fully convinced that the Hummer is the ideal weapon to clinch victory in the Dakar in the medium term!

Accompanied by two Robby Gordon Motorsports mechanics as also a specialised engine technician, Robby Gordon was present last week in the region of Hail, in Saudi Arabia, during the first test sessions set up by the MY Racing team with the Hummer H3 being prepared for Yazeed Al-Rajhi. Based on two different tests the Saudi driver handled his future rally-raid perfectly: “I immediately felt at ease at the wheel of the Hummer, it felt easy to drive, be it on the sand or on harder surfaces.”

“ I obviously took in all the advice offered by both Robby Gordon and the team, “Yazeed continued. “There’s no doubt: with MY Racing, we have made the right choice in opting for the Hummer powered by an engine in FIA configuration FIA. This year I will be competing in several events at the wheel of this car: the Hail Rally, an event I know like the back of my hand and which I have previously won, then the Sealine Cross Country in Qatar, an FIA World Cup event. Following this I will also be competing in the Silk Way Rally, in Russia as also the Rally of the Pharaohs in Egypt, another FIA event. Obviously the aim here is to prepare for the 2014 Dakar…”

Ambitious objectives
The fact that Yazeed Al-Rajhi decided to opt for one of the MY Racing Hummer beasts is naturally with legitimate ambitions. “ I’m not in the habit of losing my time or wasting my energy,” the Saudi driver commented. “Going forward my objective is to win the Dakar! I’m fully aware that it is an ambitious objective, and that to be playing up front in the beginning will not be easy, but it is a project to be built on over the years. During the first year we will be there to learn. But I truly hope the clinch the laurels one day. » 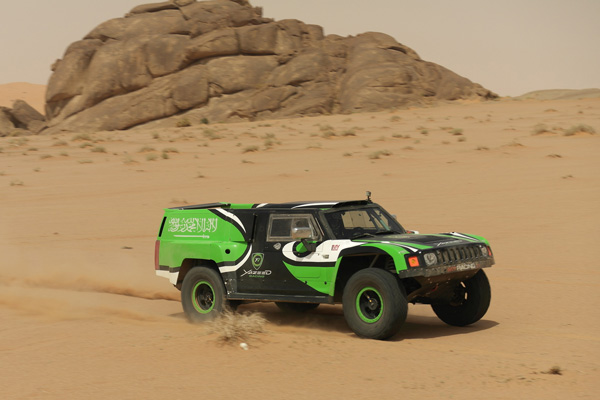 “ Today Yazeed and MY Racing hold all the trump cards to achieve their objectives,” Robby Gordon, the Hummer designer energetically proclaimed, having previously proved their competiveness in the Dakar. “Had I not lost time right at the start of the rally having made a mistake, I am convinced that I would have won the 2013 Dakar! MY Racing and Yazeed now have all the right tools combined with the right car, not forgetting that they boast the best equipped assistance trucks of the entire bivouac. It goes without saying that I will be keeping a close eye on the team and Yazeed’s performance as from now. If unfortunately I was unable to impose the Hummer in the Dakar, I am convinced that victory is perfectly within its reach and that one day we will see the Hummer on the podium’s top rung.” 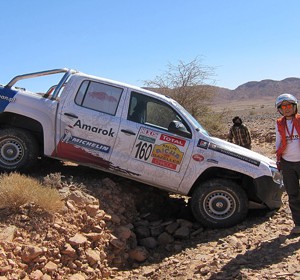 Elisabete Jacinto remains firmly in the first position of the 23rd Rallye Aïcha des Gazelles. At a time when there are only...
Copyright 2011-2016 Rallyraid.net - RISE Network. All Right Reserved.
Back to top