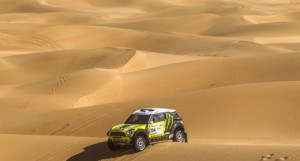 The Monster Energy X-raid Team experienced another successful day, in the Abu Dhabi Desert Challenge. In the third stage across the desert, Krzysztof Holowczyc (POL) and Andreas Schulz (GER) took their MINI ALL4 Racing to second position, behind Frenchman Jean-Louis Schlesser. While the rally leaders, Spain’s Nani Roma and his French co-driver Michel Périn, finished third with their MINI ALL4 Racing!

No stage win on day four but nonetheless, all you could see in the Monster Energy X-raid Team camp were happy faces. The drivers enjoyed today’s stage and the ride across the dunes. With their MINIs ALL4 Racing, Roma and Holowczyc covered the third stage without encountering any problems. The Pole started just a few minutes behind his team-mate and in the end, he finished runner-up – just as he had done yesterday.

“We had a lot of fun, today,” Holwczyc said with a big grin. “A rally never is easy but today, the driving was really nice.” Roma was just a few seconds slower and came third. ”The small dunes in the closing stages were very soft and consequently, they were somewhat challenging. But we didn’t get stuck, nevertheless.” The Spaniard defended his first position in the overall standings and holds a lead of 40 minutes over Spinelli, now.

Actually, it also was a good stage for Stephan Schott and Filipe Palmeiro. They got stuck just once and apart from that, they had a trouble-free day in the sand. “There was a hole behind a dune and we got stuck,” revealed the German. But short before the finish, the pairing stopped to help an injured motorbike rider. They called a helicopter and waited until the biker was salvaged. Some 30 minutes later they re-joined the rally action. They crossed the finish line in 10th position but the lost time was credited to their overall time and they came 8th, in the end.

At the same time, there also is good news regarding Paraguay’s Viktor Rempel! He was back in the team hotel as early as yesterday evening and will stay there in the coming days to recover from the pain caused by yesterday’s accident. 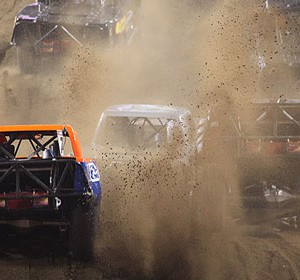 The Inaugural Stadium SUPER Trucks event at University of Phoenix Stadium in Glendale, Ariz. proved to be a rough and tumble...
Copyright 2011-2016 Rallyraid.net - RISE Network. All Right Reserved.
Back to top