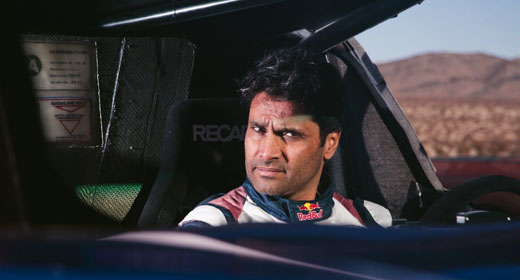 Nasser Al-Attiyah was handed no favours by the deserts of his native Qatar during the opening stage of the Sealine Cross-Country Rally.

A braking problem in the opening kilometres of the race saw Nasser and co-pilot Lucas Cruz finish the day over an hour behind early race leader Jean-Louis Schlesser. With three stages of the rally remaining the Qatar Red Bull Rally Team will now battle to claw back every minute lost on a tough first day.

Before the race Nasser had dismissed claims of home advantage by saying “desert is desert wherever you are in the world”. Nasser was proved correct by the unforgiving sands of southern Qatar as he was forced to come to a temporary halt on the opening stage of the rally.

As defending champions it was Nasser and Lucas’ job to open the road at the Sealine Cross-Country Rally. Whilst tackling a section of desert dunes it became clear to the Qatar Red Bull Rally Team duo that they had a problem with one of their rear brake discs.

With the Buggy at a standstill Nasser and Lucas were forced to roll up their sleeves in the searing desert heat and set about fixing the problem before they could proceed.

It was hardly the start the Qatar Red Bull Rally Team had in mind for Nasser’s return to his homeland but once the wheels were back on they were able to bring their Buggy over the finish line.

For the majority of the 405km stage Nasser and Lucas showed very encouraging speed and were able to match the pace of Schlesser. Now Nasser has promised a “maximum attack” for tomorrow as he sets about recovering the time lost on the opening stage.

The Sealine Cross-Country Rally is only the second competitive outing for the Qatar Red Bull Rally Team’s V8 Buggy. With car development the main focus of this race it remains certain that the trip to Qatar will provide a positive learning experience ahead of the 2014 Dakar Rally.

The rally did not start well for us due to a small problem with a rear brake disc. It was difficult to get the car moving and we ended up losing a lot of time fixing the problem.Once we had the problem under control we managed to finish the stage okay. We lost time on the leading cars but the first aim at the start of every rally stage is to reach the finish so I’m glad we achieved that.Because we had the problem at the very beginning of today’s stage we were able to come back strongly and show our true speed. Tomorrow is a new day so we will be doing our best to make up some of the time we lost today.There are still three days remaining at this rally and over one thousand kilometres to race. A good result on the next stage will make things look better for us so the tactic for tomorrow will be maximum attack.

Just a few days ago, the Monster Energy X-raid Team celebrated a major success by securing the win and fifth place in the Abu Dhabi...
Copyright 2011-2016 Rallyraid.net - RISE Network. All Right Reserved.
Back to top