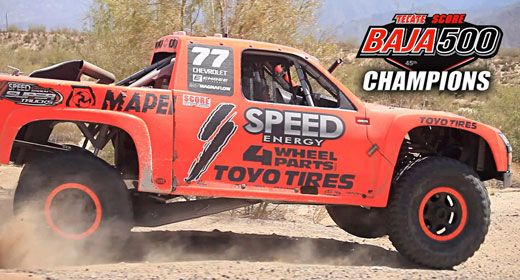 As near perfect weather conditions blanketed the Baja California desert, 32 trophy trucks gathered in Ensenada for the running of the prestigious 45th Annual Tecate Baja 500. This event saw Robby Gordon of Orange, Calif., back behind the wheel of his familiar SPEED Energy / Toyo Tires / MAPEI No. 77 Chevrolet Trophy Truck for the first time since dominating the Parker 425 in February.

During qualifying Thursday afternoon, Gordon raced around the 5-mile qualifying course the quickest, putting him on the overall pole to start Saturday’s 500-mile race. Shortly after taking the green flag, Gordon’s hopes of a flawless race where extinguished, when he had to ultimately test his driving skills by saving the No. 77 trophy truck from crashing violently in the wash. The SPEED Energy / Toyo Tires / MAPEI Chevrolet Trophy Truck would find itself hydroplaning and spinning around after hitting flooded water at nearly 90 MPH.

In typical Gordon fashion, a small mishap would never hinder the thoughts of victory; with no damage Gordon would continue to navigate the dusty roads. Second place starter Jason Voss of Cupertino, Calif., would inherit the lead for a short time, but a transmission failure would relinquish the lead to Las Vegas, Nev., driver Bryce Menzies.

Both Menzies and Gordon would capitalize on the Voss mechanical woes blasting past to overtake the position. Menzies lead on corrected time was short lived as a power steering failure would drop him back several positions in the running order.

Menzies mechanical issues set the stage for an epic back and forth battle between Gordon and B.J. Baldwin of Las Vegas, Nev. As the duo would head north along the Pacific border towards the finish, the two would trade positions for several hundred miles before Baldwin would find trouble and stop for a longer period of time during the final pit stop.

With just over 100-miles of the race course left, Gordon was the first truck on the road into Ensenada with over a six minute lead on Baldwin.

Gordon and the SPEED Energy / Toyo Tires / MAPEI Chevrolet Trophy Truck would cross the finish line after the sunset Saturday night with an elapsed time of 10:05.43, nearly nine full minutes (on corrected time) ahead of second place finisher B.J. Baldwin. Bryce Menzies would cross the line with a time of 10:22.20 for a very respectable third place finish.

After the race Gordon commented on the reliability of his Toyo Tires;

“I cannot say enough about Toyo Tires and the race this weekend. To be able to win the race and beat B.J Baldwin who finished second in trophy truck, then have wins in Class 1 with Justin Matney of RPM Off-Road, along with wins in Spec 8, and Class 8 just proves how good these tires are. I cannot say enough about them. It was a killer weekend for SPEED Energy as well… it was a SPEED take over! I also want to thank everyone from Toyo for taking the chance on the RPM Off-Road Team and letting them join the family. All around we are super excited to have another winning partner in place.”

The next race for Robby Gordon, will take place Saturday night, June 8, in St. Louis, Mo., as SPEED Energy Stadium SUPER Trucks take to the Edward Jones Dome for round No. 6 of competition. 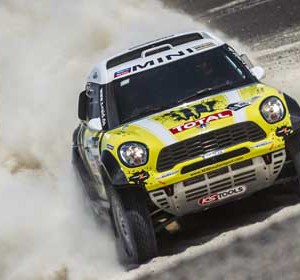 At the end of a one-month rally break, the Monster Energy X-raid Team is going to travel to Argentina, next week. There,...
Copyright 2011-2016 Rallyraid.net - RISE Network. All Right Reserved.
Back to top