The sun was already beading down on Astrakhan when the first car took the start of the penultimate stage of the 2013 Silk Way Rally (466.02kms, including 412 against the clock). The action began on fast compact and rolling tracks before meandering between lakes and chotts. At the 50km point, the route headed north and into the Astrakhan desert before heading back to the bivouac via extraordinary dunes and more rolling tracks. 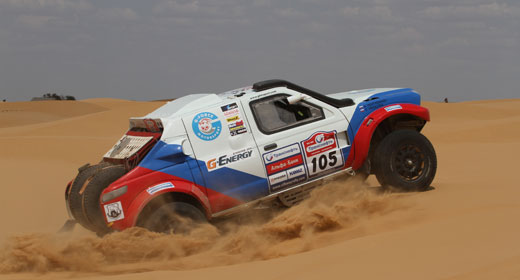 In the car category, Vladimir Vasilyev (G-Force), started fifth and quickly caught up to Jean-Louis Schlesser (Schlesser Original), who had strayed off course and the two rekindled their duel of the previous day. The show was as breathe taking as the venue. When the dust settled Vasilyev and co-driver Vitaly Yevtekhov won the stage and our now 8:17 behind Schlesser and his navigator, Konstantin Zhiltsov in the general classification. But the performance of the day was put in by Christian Lavieille and Jean-Michel Polato (Juke Dessoude), who finished third and moved up to fifth overall.

With a smile on his face Vasilyev explains his day. “We caught up to Schlesser and we never left his side just until the arrival. We also lost 30 seconds in the sand and we had to make a few U-turns but apart from that it was a very nice stage.” As for Schlesser, the most experienced competitor in the field was showing the effects of this long, difficult and very hot day. “The beginning was very had and around the 70km point, we opted for a parallel track,” said the Frenchman. “When we realized our mistake, we returned to where we entered this track, which cost us 10 or 12 minutes. We then found ourselves with the Kamaz trucks and Vasilyev. It was an extremely hard day.” 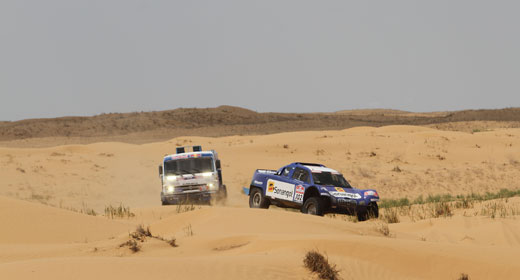 Third place Christian Lavieille drove like a man possessed over the 412 special stage kms. “Everything worked really well for us today,” said Lavieille. “It wasn’t as hot as it was on the Volgograd-Astrakhan stage. When we came to the 70km point we saw Schlesser returning to the track after taking the wrong heading….Jean-Michel did a great job navigating and we drover error-free. However, it wasn’t easy in the dunes because we did have much room for error and the san was very soft. This Silk Way is a unique opportunity to test components, reliability and the stability of the buggy that has gone through changes since the Dakar. It has been a very positive week and a fantastic rally with long and difficult stages. It is a proper rally where we are in the car for six hours every day! There is a lot of sand and long runs in the dunes. On this type of rally, all the competitors have the chance to bounce back if they have a bad day. It is very well organized and in the bivouac we get to eat the best soup in the world!”

Aidyn Rakhimbayev and Asimov Gabdulla (Toyota Overdrive) took fourth place after a trouble-free run, while Evgeniy Firsov and Vadim Filatov (Toyota Overdrive), struggled to finish fifth, after becoming sea sick in the dunes. Marek Dabrowski and Jacek Czachor (Toyota Overdrive) began stage six with the goal of finishing the day and learn as much as they could ad that they did.

Seventh place this morning, Laurent Fouqet and Bruno Bouey (BMW Sodicars) retired just after the start of the stage due to a melted electrical connection to the dashboard that risked setting the car on fire. Nicolas Duclos and Sébastien Delaunay, (Polaris) who were 15th overall two days ago, suffered an oil line leak, which provoked a fire when the oil bled onto the exhaust pipe. They were towed back to the bivouac by their assistance vehicle and will rejoin the rally for the final stage. Alexander Nikonenko and Konstantin Mescheryakov (Crossover) had a turbo charger problem and also returned to the bivouac and too will be allowed to continue tomorrow. 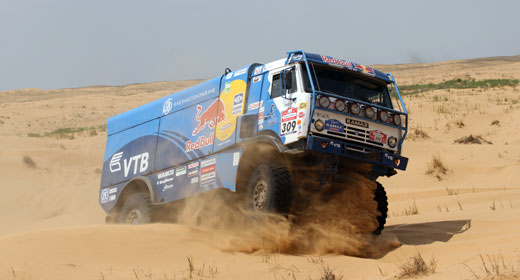 In the truck category, Anton Shibalov (Kamaz) took top honours for 3:41 ahead of team mate Dmitry Sotnikov, while Eduard Novikov completes the Kamaz Master trifecta. “It was a really hard special stage,” said Shibalov. Driving in the steppes without being able to build up speed to take on the holes and bumps was difficult and tiring. The Silk Way Rally is much more difficult than the Dakar!”

Second place Sotnikov stopped to help team mate Ayrat Mardeev, who had engine problems. “We had a good day but it was very hard,” commented the Russian. The terrain in this region isn’t easy. When we stopped for Mardeev, Shibalov overtook us. “

Third place Nikolaev, accompanied Schlesser and committed the same error as the leader in the car category.

In the history of the X-raid team, the Baja Aragon has got a special significance: here, in the year 2009, both Stéphane...
Copyright 2011-2016 Rallyraid.net - RISE Network. All Right Reserved.
Back to top