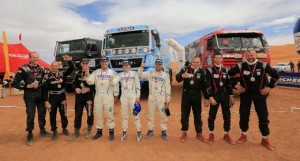 The team OLEOBAN ®/MAN Portugal won, categorically, the 14th edition of the Rallye Oilibya du Maroc. The pilot Elisabete Jacinto won again this great African marathon, competition where she also achieved the first place in 2010. The Portuguese won three of the six stages held and always maintained a high level of competitiveness against the nine truck teams, which allowed them to reach the highest place on the podium of their category.

Elisabete Jacinto completed the sixth and final stage of this competition in third place with a difference of 4m37s to the first position, which was achieved by the Dutchman Kees Koolen from the Ginaf Rally Service team.

The team formed by Elisabete Jacinto, José Marques and Marco Cochinho maintained, throughout the race, a place among the top three of their category and also won a place within the top 20 of the overall classification auto/truck ending race in 17th place among 64 competitors.

The pilot Elisabete Jacinto was pleased with the victory achieved “it was a nice rally, very well disputed. Our team was very consistent and so the triumph as got a very good taste. Today we had some setbacks in navigation but we were able to solve all the small problems. We showed our strength and reliability and we are very pleased to have won this rally”, said the pilot at the end of the Rallye Oilibya du Maroc 2013.

After this victory the team OLEOBAN ®/MAN Portugal is facing two months of preparation for the Africa Eco Race 2014 which is scheduled to start at the end of this December.

The last stage of the Rally of Morocco finished in the beautiful skirts of the Merzouga dunes, after a 200 km special stage....
Copyright 2011-2016 Rallyraid.net - RISE Network. All Right Reserved.
Back to top