The last stage of the Rally of Morocco finished in the beautiful skirts of the Merzouga dunes, after a 200 km special stage. The journey was not easy but the three XTREM+ Polaris crossed the finish line taking over the entire T3 class podium. Yasir Saedan and Laurent Lichlauchter took the victory, the second place was owned by Nicolas Duclos and Sebastien Delaunay and the third place was for the Australian team, Garry Connell and Gary Whittle. The race had a great outcome for the XTREME+ Polaris team.

Yasir Saedan/Laurent Lichlauchter N°302: “_We made it safe to cross the finish line, because again, there were lots of stones and rocks out there, says Saedan. After small water crossing in an oued, we broke the universal joint due to the thermic shock… But we were able to change it fast, and here we are at the finish line, as winners of the T3 class! I am so glad with the RZR XT+ 900 XP40 because in the fifth races that we took part, I won four. Now my new goal is the Dakar… and I will prepare physically so that I can get there in the best shape next January!”

Nicolas Duclos/Sebastien Delaunay N° 327: “_We started out with 130 km… in mountain cemented tracks, says the French-Congo driver. The stones were big, and we had one puncture… Then I slowed down to avoid changing tires again and in the last 100 km I had fun because there was actually sand… but with stones! I could not believe it, stones in the sand! The RZR XT+ 900 XP40 is perfect and doesn’t require lots of work before the Dakar.”_

Garry Connell/Garry Whittle N°355: “_We did not have a good day, tells Garry Connell, because, like Yasir, we broke a joint after the water passage and we spent time changing it. Then, there were so many stones that I tried to avoid but I run into one and made a hole on one tire. After that we drove carefully and here we are! It was a great rally and an excellent opportunity to get more experience on the RZR XT+ 900 XP40 and the work of the Xtreme+ to prepare the Dakar. The RZR requires some adjustments before going to South America but I am very satisfied with its performance.”

Tomorrow, Garry Connell will start his participation in the Merzouga Rally. With Annie Seel as Connell´s co-driver, the adventures of the XTREME+ Polaris team will continue! 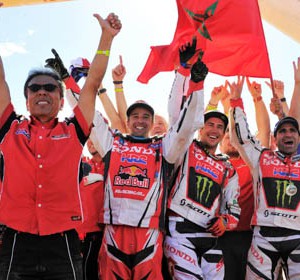 The celebrations begin for TEAM HRC. Things couldn’t have been any better for the new Honda CRF450 RALLY with a victory...
Copyright 2011-2016 Rallyraid.net - RISE Network. All Right Reserved.
Back to top