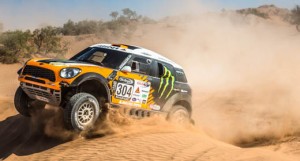 With six special stages contested and 1500 special-stage kilometres across Southern Morocco covered, the Monster Energy X-raid Team wins the OiLibya Rally of Morocco courtesy of the pairing Orlando Terranova (ARG) / Paulo Fiúza (POR) and their MINI ALL4 Racing with a lead of nearly 10 minutes over Frenchman Patrick Sireyjol. But the rest of the X-raid team also delivered in fantastic style and made for a unique team result, with four MINI ALL4 Racing making it to the top 10!

Vladimir Vasilyiev (RUS) and Vitaly Yevtyekhov (UKR) clinched the sensational third place. In the fourth stage, Vasilyiev who contested his first rally on sand in the MINI ALL4 Racing, even secured a stage win. The Chilean-French pairing Boris Garafulic / Gilles Picard took their MINI ALL4 Racing to fourth place. For Garafulic, the rally in Morocco was the first appearance since the Dakar in January. By consistently securing top eight results, he succeeded in working his way up to the top positions in the overall rankings. 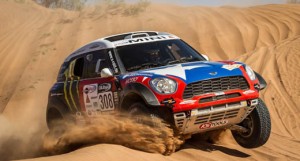 For the Argentinean pairing Federico Villagra and Jorge Perez Companc it was the first sand rally they contested with the MINI ALL4 Racing. In five of the six stages they made it to the top four, only on day one they had their problems with the challenging dunes. But following this short familiarisation phase, Villagra really went for it and worked his way back up to ninth position in the overall rankings. Adrian Yacopini (ARG) and Marco Scopinaro (ARG) also contested their first event on sand and dunes, with their BMW X3 CC. Following some problems in the opening stages they delivered in consistent style and rewarded themselves by finishing 11th. The German pairing Stephan Schott / Holm Schmidt, however, had to cope with a heavy dose of bad luck. On day three they lost a lot of time due to a gearbox failure and finished 41st, in the end. 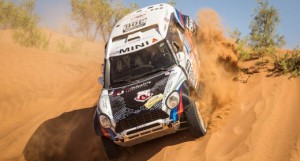 “Orly was extremely fast, here, and deserved to win,” said X-raid Team Manager Sven Quandt. “But all our other drivers also impressed with extremely good performances. Many of them encountered their problems on day one in the dunes but afterwards, they demonstrated what they are able to achieve. I’m really delighted about this result. Four cars in the top 10 – that’s just sensational.”

Team X-raid is going to compete in one more event, this year: the Baja Portalegre (01st and 02nd November, 2013) in Portugal. There, Poland’s Krzysztof Holowczyc will give his very best to win the FIA Cross Country Rally World Cup title. 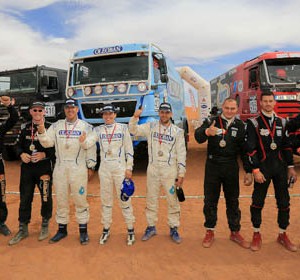