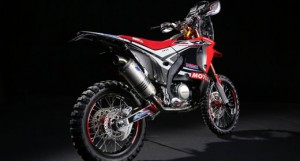 Honda has released the official photos of the new CRF450 RALLY, model designed specifically for Rally racing. The TEAM HRC (Honda factory team) will participate in the CRF450 RALLY in the next Dakar Rally 2014-Argentina, Bolivia, Chile, in January 2014.

The TEAM HRC returned to Dakar Rally in January 2013 for the first time after 24 years and made him a CRF450 RALLY prototype based on commercial competition model CRF450X, enduro model Honda. The 2013 Dakar Rally generated valuable information on key areas such as engine power, aerodynamic performance, durability and maintenance requirements, used as a basis for further design modifications and improvements. The resulting new model retains the program RALLY CRF450 Fuel Injection (PGM-FI *), system electronic fuel injection that has shown proven performance in the harsh and highly variable environmental conditions of the Dakar Rally. The new CRF450 RALLY TEAM will be used by the HRC and will be released to other equipment such as production motorcycle rally in 2014.

The TEAM HRC participate in the Morocco Rally 2013 which starts on 13 October with the CRF450 RALLY, using the same combination of five drivers and five motorcycles for the 2014 Dakar Rally. It is expected that the current testing race conditions can provide useful information for further improvements. 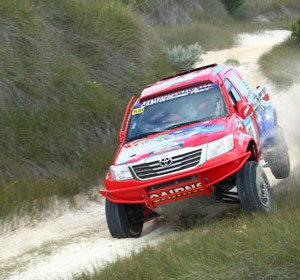 Giusy Concina, Australia._ There are 99 competitors at the start of Australasian Safari 2013, a really big adventure, nice...
Copyright 2011-2016 Rallyraid.net - RISE Network. All Right Reserved.
Back to top