After a 120 km of warm to regain the confidence with the African terrains, at 17:00 the 108 competitors of the Merzouga Rally 2013 took the start for the Prologue that will be decided the starting order of  tomorrow.

Alessandro Botturi, with nr 82 for the bike Category was the first to took the start. Botturi, who made his debut in the rally discipline at Merzouga Rally in 2011, finished 3rd and tomorrow will start  in the third position.

Arnold Brucy, Jean Brucy’s son, who also made his debut in the rally discipline this March in  the XRally Marrakech, used his motocross experience and was the fastest in the prologue.

The 24 young French riders tomorrow will open the track. It won’t be an easy start as tomorrow’s stage is quiet challenging with dunes, herbe à chameaux and a lot of off-track navigation.

HRC rider Sam Sunderland and Helder Rodrigues  did a strategic prologue and tomorrow will start in 15th and 28th position. 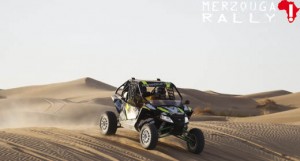 In the SSV Category the team Culus-Bonneaudeau was the fastest and tomorrow will take the start in front of Fidel Medero J.-Ventaja Cruz and Roustan-Pernot.

The Merzouga Rally is the third round of the Rally Pro Series,the championship  promoted  by Edo Mossi on 3 rounds  (XRally Marrakech, Serres Rally and Merzouga Rally).  After the first two races, Marco Gandini is leading the rally classification with 105 points in front of Jordi Viladoms and Sandro Calesini (75) , Andrea Fesani (72) and Frans Verhoeven (66).

Cesare Zacchetti is leading the Rally Lite Category with 120 points in front of Angelo Pedemonte (102), Alessandro Fadda (75), François Charliat (66), Arnold Brucy and Gustavo Querales (60). The battle is open to win the 7.500 euro prize for the Rally category and 7.500 euro for the Rally Lite.

After one week in the Rally Oilibya of Morocco, Garry Connell takes place in the Merzouga Rally driving his Polaris Extreme+...
Copyright 2011-2016 Rallyraid.net - RISE Network. All Right Reserved.
Back to top