Gordon: I don’t know what happened 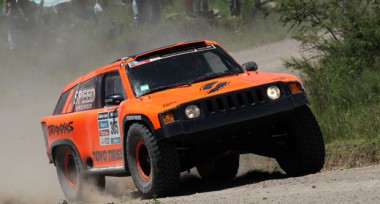 Sunday marked the start of the 2014 Dakar Rally and the debut of the SPEED Energy / Toyo Tires HST Gordini. The stage went from Rosario to San Luis and was comprised of a 629-kilometer liaison leading to a very short 180-kilometer Special through the region of Cordoba. Even though the stage was short, each competitor needed to pace themselves through the narrow tracks and stony sections remembering this is the start to the toughest off-road race in the world.

Despite being very prepared for this year’s Rally, the race did not begin as well as the SPEED Energy / Toyo Tires team had hoped. Robby Gordon for the second straight year would be taken by surprise on the opening stage as the SPEED Energy team encountered multiple issues.

Gordon talked about his misfortune shortly after returning the SPEED Energy / Toyo Tires HST Gordini into the bivouac. “I don’t know what happened. Everything went smoothly when we took things easy on the link section, but from the moment we started the special, we had vapor lock problems and we had to stop. Then, all the other fluids started to overheat, so we had to stop at least five or six times… At the end, we had stopped for the umpteenth time when competitor No. 390 offered to tow us to the end of the special. Honestly, it’s strange; I don’t know why this happened. We’ll have a look at it in the bivouac, although it’s disappointing to lose two or three hours on the very first day of racing.”

Gordon trails leader Carlos Sousa of Portugal by 2 hours and 34 minutes overall, which is not the way Gordon and the SPEED Energy / Toyo Tires team wanted to start the Rally. The SPEED Team and Gordon know that they cannot make any more mistakes if they want any chance of a top-10 finish when the Dakar Rally ends in Valparaiso, Chile.

Gordon will have an opportunity to chip away at that deficit in Monday’s second stage which at 365 kilometers is much longer than the opening 180-kilometer stage. Monday’s special will take competitors into a high-speed test through Argentina’s grey sand dunes. The HST Gordini was designed with high speeds in mind and Gordon and navigator Kellon Walch will need to quickly make it through the technical aspects of Nihuil’s dunes to get back into the race. 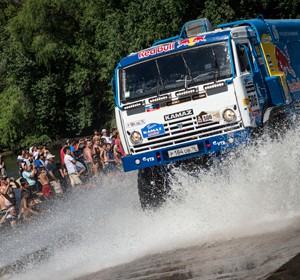 The party atmosphere of the pre-race Podium presentation gave way to the serious business of racing as Stage One of the 2014...
Copyright 2011-2016 Rallyraid.net - RISE Network. All Right Reserved.
Back to top