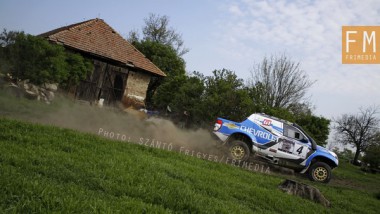 Lukasz Komornicki and Ernest Gorecki from Poland won Túrkeve Cup, season opener of the Open Hungarian Championship and CEZ Cup. Antal Fekete and György Tóth reached the finis has runner-up, in fron of Erik Korda and Julianna Nyirfás, who climbed to the podium from 14th place.

Last day of Túrkeve Cup was full of surprises: first Károly Fazekas and Péter Simon rolled their BMW X6, the winner of multiple specials, Czech Zdenek Porizek and his Slovakian co-driver Marek Sykora’s race came to an early end in a ditch. Finally it was turn of Zsolt Murczin’s Mitsubishi – literally. Fortunately all three crews escaped uninjured, Murczin and his co-driver Róbert Bagics even managed to reach the finish. Josef Pelc and Alena Pelcova had to quit the race due to mechanical problems after the first special of the day. 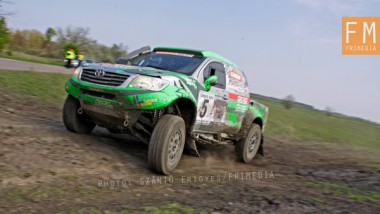 After the three specials of Sunday, Lukasz Komornicki and Ernest Gorecki from Poland, despite still suffering from gearbox problems, increased their advantage to almost five minutes. This was second victory from only two races of their brand new Chevrolet S10. “We kept ourselves to our tactics, we just wanted to keep the first place. Without third gear it was not easy but we tried to get the best out of the situation and were fast enough. Our car is good but we still have a lot of work to do,” said Komornicki at the finish line.

Antal Fekete and György Tóth (Toyota Hilux) kept a constant and fast pace throughout the weekend. For Sunday their aim was to keep their second place secure from their two rivals with whom they were within one minute at the beginning of the day. “I really enjoyed the weekend. I’ve never raced on such muddy tracks and we had some problems with keeping the windscreen clean but I think everyone experienced this. On Sunday the track was drier but some bumps and deep ditches evolved and we had to pay close attention to those. Today morning there were three cars within one minute but we didn’t need to attack, rather to keep our position and we succeeded,” said Fekete. 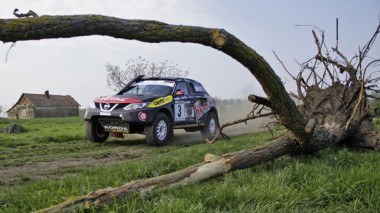 Erik Korda and his reigning ERC 2WD champion co-driver, Julianna Nyirfás started to climb up from the 14th place due to a puncture on Friday. But they managed to do this so well that finally they were able to grab a podium finish. But Sunday also didn’t pass without adventure for them: “Our engine stopped in the finish of the last special. Already from the start of the special less cylinders worked, then it stopped completely. We were towed by Sanyi Sebestyén to the parc fermé, so we had some excitement at the finish,” said the driver.

Fourth at the finish line was former Hungarian Champion co-driver Czech Tomas Ourednicek who started only at his second race as driver. Behind him Sándor Sebestyén, Zoltán Kaposi and Imre Varga finished in fifth, sixth and seventh position.

In category T2 the winners were Sándor Sebestyén and Aladár Laklóth, in front of Tomas Horansky from Czech Republic and Mariusz Andrych from Poland. In category TH Piotr Bialkowski from Poland finished first in front of the rookie crew of György Lovász and Donát Berki. In bikes, Richárd Hodola won in front of Laller Horváth.

Next round of the Hungarian Championship is Riverside Baja, which will be held in Beled on 9-11th May. 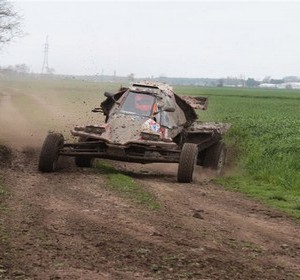 After a day full of struggles Zoltán Hangodi and the Klement Mosquito occupies the 14th position on day 2 of Túrkeve. The...
Copyright 2011-2016 Rallyraid.net - RISE Network. All Right Reserved.
Back to top