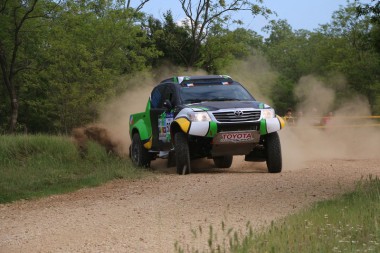 After Saturday’s stage Fodor occupied third place in the overall classification but on Sunday he made it clear right at the beginning of the day that he aims high. By the end of the second special his initial 59 seconds’ gap turned into and advantage of nearly 3 minutes and a half and he took the lead. On the third special, however, a technical glitch caused some stir: they refilled fuel of bad quality that stanched the filter of both fuel pumps. The advantage they fought so hardly for decreased quickly but at the end of the special they still held a 21 second gap. Later it turned out that this was also the final result of Riverside Baja, as the last special had to be cancelled due to the torrential rain hitting the area.

“On Sunday before the third special we refuelled at the same filling-station as Pál Lónyai last year. The problems started after refuelling: due to the bad quality fuel the filter of the fuel pump was stanched and we became much slower. Our closest rival Károly Fazekas gained a lot of time on us. By the end of the special the gaps were very small, Zoltán Hangodi was also only some seconds away and Antal Fekete also within one minute – if the last special wouldn’t have been cancelled, anything could have happened,” – said Fodor. 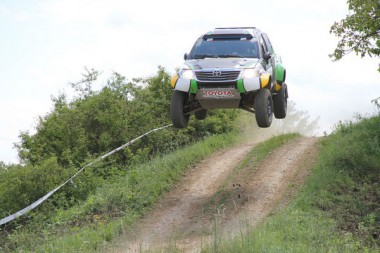 It was a special weekend for Fodor and Csató who – as their new car hasn’t arrived yet – started at Riverside Baja with a rented race car. Moreover, the Toyota arrived only on the day before the event so they had to get used to it during the race. But it was a special weekend also for Hungarian cross-country rally sport, as on Saturday the participants of Riverside Baja – for the first time in the history of the Hungarian Cross-Country Rally Championship – joined Bükfürdő Rally racing for one day together with the classic rally field that Fodor and Csató liked a lot, although the short rally tracks didn’t really suit their car.

“The rally itself we loved a lot, the organisation was excellent, the tracks were good. Joining the classic rally event was a great idea, we can only say congratulations to the organisers. This can make both sports stronger. It was very good to see the fans cheering us near the track. Some of them may have seen cross-country rally for the first time and I hope we proved them that our races are also worth visiting” – praised the event the co-driver, Attila Csató.

“For Saturday our tactics was to be in the top three and we managed to do that. We knew that our time will come on Sunday. We feel sorry for Pál Lónyai’s crash, we could have fought a big battle. Károly Fazekas and Zoltán Hangodi were also very fast. We would like to say thanks to South Racing for the fantastic car,” – added the driver.

The Hungarian championship continues on 6-8 June in Gyula with Gyulai Várfürdő Cup. 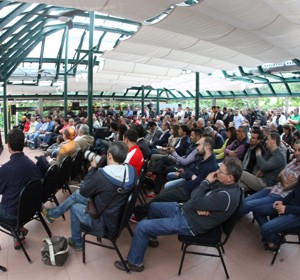 The Dakar World Tour has made a stopover in Spain, making a special visit to two titleholders, Nani Roma and Marc Coma. The two champions...
Copyright 2011-2016 Rallyraid.net - RISE Network. All Right Reserved.
Back to top