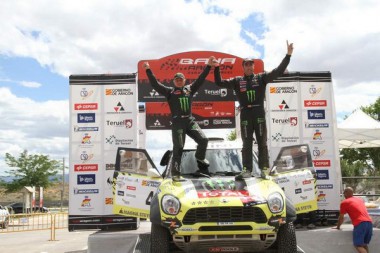 Massive success for the Monster Energy X-raid Team and X-raid Team in Spain’s Baja Aragon. At the end of the three-day event with its five special stages, the four positions at the very top of the ranking were secured by four MINI ALL4 Racing! With this success, X-raid repeated the outstanding triumph of 2013. In the end, Spanish-French pairing Nani Roma / Michel Périn clinched the win, followed by their team-mate Orlando Terranova (ARG) and his Spanish co-driver Moi Torrallardona. Third place was secured by Poland’s Martin Kaczmarski and his Finnish navigator Tapio Suominen, with the Russians Vladimir Vasilyev / Konstantin Zhiltsov finishing fourth. With this result, Vasilyev succeeded in extending his lead in the FIA World Cup for Cross Country Rallies overall standings. His toughest rival in the battle for a title, Yazeed Al-Rajhi, was forced into retirement due to an accident while Nasser Al-Attiyah lost ground due to a technical failure.

On Sunday, the two Monster Energy X-raid Team pairings once again proved to be the benchmark. When they started into the final day, the gap between Roma / Périn and Terranova / Torrallardona amounted to just 33 seconds. Roma succeeded in winning the first special stage of the day followed by his Argentinean team-mate, extending his lead to 1:25 minutes. In the final special stage, Terranova pushed as hard as he could to pass the Catalan. In the end, he was 1:16 minutes faster but this wasn’t enough to pass Roma in the overall standings. “I gave my very best and pushed and pushed,” Terranova said afterwards, “But it wasn’t to be. The special stages were truly demanding. Due to the stony ground, the tyres were nearly worn out when we crossed the finish line.” In 2013, Nani Roma also won the Baja Aragon ahead of Terranova. “I’m absolutely delighted with having won this event,” beamed Roma. “After all, many of my friends were on site. But I encountered a massive moment of shock in the special stage when I suddenly saw two private cars driving right in my direction on the track. Fortunately I was able to avoid them. The MINI once again delivered in outstanding style – a fact that also is demonstrated by the result.”

Meanwhile, duo Kaczmarski / Suominen impressed with a great comeback. On Saturday evening they held seventh position in the overall standing but by finishing fourth and third respectively, on Sunday, they battled their way back up to finish third with their MINI ALL4 Racing, in the end. “I’m rather happy but nonetheless, winning is my ultimate goal,” said the young Pole, thus displaying a lot of fighting spirit. “But I continued to learn, here. The special stages were anything but easy and I tried to drive fast while keeping the risk of a puncture as low as possible at the same time. This strategy worked fine and was crucial on our way to finishing third.”

As they had the top priority to defend and extend their World Cup lead, Vasilyev and Zhiltsov didn’t take too many risks and by coming seventh and fifth in the Sunday special stages, they finished fourth overall, in the end. “We pushed but without overdoing it,” revealed Vasilyev. “In this Baja you have to have a lot of experience with WRC-style special stages. There are a lot of rocks at the trackside that quickly can damage your car. So, having finished fourth is absolutely fine for us.”

Meanwhile, the pairings Erik van Loon (NDL) / Wouter Rosegaar (NDL) and Aidyn Rakhimbayev (KAZ) / Anton Nikolaev (RUS) had to cope with a major dose of bad luck. The two Dutchman somersaulted and were forced into retirement, with both driver and navigator fortunately surviving the incident unharmed. And Rakhimbayev soon was forced to return to the service park due to a technical problem. 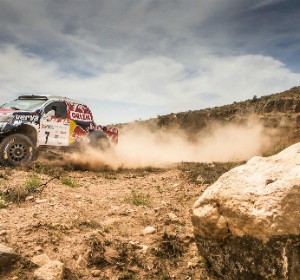