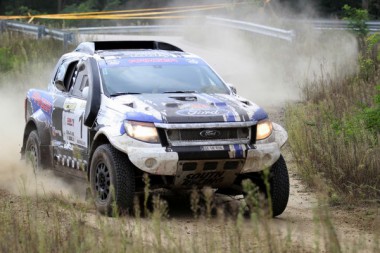 Four kilometres – this much was missing for Imre Fodor and Márk Mesterházi to finish Adrenalin Cup as winners. In the last special of the race torrential rain arrived to the tracks near Nagykálló, and the crew of 4×4 Hungary slid into a ditch and wasn’t able to finish the race.

The last stage of Adrenalin Cup was full of ups and downs for Imre Fodor and Márk Mesterházi. The Ford Ranger duo started the day with an advantage of five seconds, but as they were unable to change a broken part on Saturday, it was to be feared that their Polish rivals, Marcin Lukaszewski and Magdalena Duhanik would catch them. In the sandpit, where Fodor’s missing front left drive was a big disadvantage, they switched positions in the first special of the day, but on the longer track Fodor fought back and not only retrieved the lead, but gained a full minute of advantage, too.

In the afternoon the shorter special was once again won by the Polish crew, but they reduced the gap to Fodor by only several seconds. For the last special torrential rain arrived to the area and made the route as slippery as ice. Only four kilometres before the finish the Ford Ranger slid off the road into a ditch and it wasn’t able to get back to the track on its own, so the crew of 4×4 Hungary couldn’t finish Adrenalin Cup.

“Four kilometre before the finish our race ended in a ditch. Maybe we should have driven slower because we didn’t know for how long the rain was going on, in what condition the terrain was, but we had to be fast because the gap was very small and Lukaszewski was really fast. We slid off the road and got trapped, so much that the car was finally freed by a tractor.

Unfortunately this year we didn’t have too much luck in racing, but the Ranger never let us down. I want to say thanks to Márk for the perfect navigation, and to our assistance crew for their great work, not only this weekend, but also through the past years. The Hungarian championship title is gone for this year, but the podium has some more steps and there are two events left from the season. We’ll be there!” Fodor said after the rally. 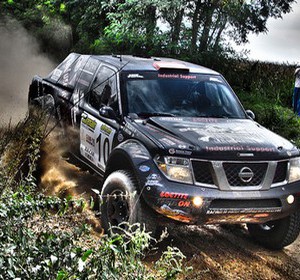 Sólyom Team completed a race full of complications at Adrenalin Cup held in Nagykálló and its surroundings. At the event...
Copyright 2011-2016 Rallyraid.net - RISE Network. All Right Reserved.
Back to top