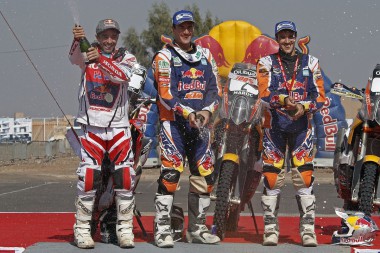 Marc Coma Secured the title of FIM off-road Rally World Champion since yesterday’s accident of his opponent Paulo Gonçalves, After six days of intense racing, Marc won the 15th edition of the OiLibya Rally of Morocco. For the 6th time, he dons the FIM World crown, he finished the season as he started it, with a victory on the Dakar.

The victory of this stage six went to Joan Barreda (Honda), fifth victory on paper, the third in reality, because of the avalanche of penalties he took. He ends up stealing 4th from Ruben Faria.

There was some damage today: Joan Pedrero fell 50 meters from the start and it was spectacular. If the handsome Spaniard was not injured, his Sherco on the other hand was in such a state that the “Broom truck repatriated him… Alain Duclos brings the French Sherco team a 9th place, in recognition of all the work carried out by the team throughout the rally. 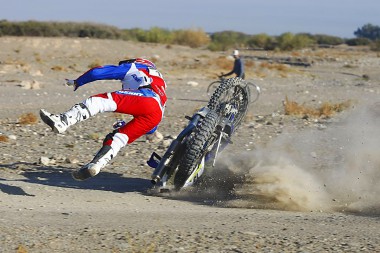 The charming Laia Sanz, Honda’s new recruit enters the top 10 of the rally showing her strong potential, Rafal Sonik on a Yamaha Quad distinguished himself by achieving the feat of obtaining 6 stage wins and pocketing a world title for the third time. While Camellia Liparoti, (women’s category) crossed the finish line despite two falls in stage 4 she was emotional and happy, the Franco-Italian cried when realizing that for the 6th time – just like Marc Coma – she is world champion in the “charm” category.

Marc Coma: “I just had such an intense week! The word is not strong enough. 3 dates stand out: for me a win on my birthday (on the 7th ), a world title yesterday (8th) and the final victory today make me a happy man . It looked easy but it was not. The people in the shadows, those who work in the team to prepare the best bikes are to congratulate and thank! “”in this rally, I opted for an easy tactic: keep the advantage Take the lead of the rally and make no mistakes. Winning the OiLibya Rally of Morocco after winning the Dakar is fantastic. I am full of emotion; I started last Saturday with the desire to win! I am very pleased to have done just that”

Sam SUNDERLAND (2nd): “I made a navigational error in Stage 1, I lost 15 minutes. Then, with some new settings on the suspension of my bike, everything changed … Every day I felt better and better, while having the feeling that I was progressing to the limits of my KTM. I felt a bit of pressure today, we were close to each other and eventually, I kept my place … I am very happy! ”

Helder Rodrigues (3rd): “The results are good with this new bike we were testing. No major problems have been raised, I was on the podium but I thought I could have done better. But overall, the result is positive. I spent two days in making small errors but that was not the point. It’s all in the developing work we all do. All the CFR 450 team worked hard during the week..well done !. ”

Rafal Sonik (Quad winner): “I am very happy, everything went very smoothly every day. Previously, I made many mistakes, much less now. I’ve made great progress mentally, strategically … My new challenge is now to ride with the fastest bikes … I am a man of constant challenge! ”
ENDURO CUP

The battle was between the winner Philip Dasse, and Eric Schiano, the second. Each day, the two men fought until the final podium in Marrakech One.

Philippe Dasse (Enduro Cup winner): “Eric (Schiano) beat me last year. So I took my revenge on this varied terrain in Morocco, he really gave me a hard time, though I was consistent and I enjoyed it ! I’d like to do another rally, not the Dakar it takes too long, I cannot be professionally absent from work for several weeks. I wish the OiLibya Rally of Morocco continues, it’s my playtime and I will be back in 2015 it’s one each…. ”

The Qatari won the 15th edition of the OiLibya rally 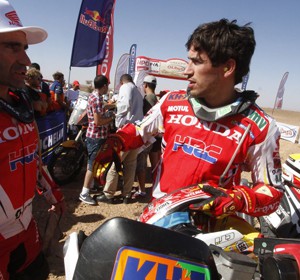 It was going to be a fast stage on a long day. The fifth OiLibya Rally of Morocco special was perhaps not the longest on paper,...
Copyright 2011-2016 Rallyraid.net - RISE Network. All Right Reserved.
Back to top